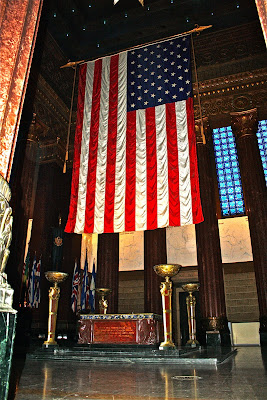 The Indiana War Memorial in Indianapolis

Logan Lodge No. 575 in Indianapolis was chartered in 1888, and is named after Major General John A. Logan, one of the most famous and popular Union Army generals of the Civil War. Because he was born and raised by settlers who (like Abraham Lincoln himself) had come to Illinois out of Kentucky, Logan's sympathies were torn by both sides in the conflict. His own brother-in-law, Hilbert A. Cunningham, joined the Confederate Army for two years as head of the South's only Northern-born group, Company G of the 15th Tennessee, before deserting in 1863 to join the Union side, where he became a captain on Logan's staff.

After the war, John Logan became a fierce Republican, an Illinois senator, a vice-presidential candidate, and presided over the impeachment trial of Andrew Johnson. He was a staunch supporter for the cause of Veterans, and was one of the primary advocates of creating what eventually came to be called Memorial Day as a national holiday (a day that is important all across America, but especially here in Indianapolis).

Brother Logan was raised as a Master Mason in Mitchell Lodge No. 85 in Pinckneyville, Illinois. He was a York Rite Mason and Templar in Chicago. He was also a member of the Scottish Rite there, and was elected to be coroneted a 33° in 1886, but died before it could be conferred.

Memorial Day (originally known as Decoration Day) was officially declared on May 5th, 1868 by General Logan, in his role as national commander of a relatively new fraternal group, the Grand Army of the Republic. It was first observed on May 30th of that year when flowers were placed on the graves of both Union and Confederate soldiers at Arlington National Cemetery. As a result of his own personal circumstances and his experience during the war, as well as his wide popularity throughout the reunited nation, he was uniquely qualified to establish this healing annual day for observance and memory.

HEADQUARTERS GRAND ARMY OF THE REPUBLIC

The 30th day of May, 1868, is designated for the purpose of strewing with flowers or otherwise decorating the graves of comrades who died in defense of their country during the late rebellion, and whose bodies now lie in almost every city, village, and hamlet church-yard in the land. In this observance no form of ceremony is prescribed, but posts and comrades will in their own way arrange such fitting services and testimonials of respect as circumstances may permit.

We are organized, comrades, as our regulations tell us, for the purpose among other things, "of preserving and strengthening those kind and fraternal feelings which have bound together the soldiers, sailors, and marines who united to suppress the late rebellion." What can aid more to assure this result than cherishing tenderly the memory of our heroic dead, who made their breasts a barricade between our country and its foes? Their soldier lives were the reveille of freedom to a race in chains, and their deaths the tattoo of rebellious tyranny in arms. We should guard their graves with sacred vigilance. All that the consecrated wealth and taste of the nation can add to their adornment and security is but a fitting tribute to the memory of her slain defenders. Let no wanton foot tread rudely on such hallowed grounds. Let pleasant paths invite the coming and going of reverent visitors and fond mourners. Let no vandalism of avarice or neglect, no ravages of time testify to the present or to the coming generations that we have forgotten as a people the cost of a free and undivided republic.

If other eyes grow dull, other hands slack, and other hearts cold in the solemn trust, ours shall keep it well as long as the light and warmth of life remain to us.

Let us, then, at the time appointed gather around their sacred remains and garland the passionless mounds above them with the choicest flowers of spring-time; let us raise above them the dear old flag they saved from hishonor; let us in this solemn presence renew our pledges to aid and assist those whom they have left among us a sacred charge upon a nation's gratitude, the soldier's and sailor's widow and orphan.

It is the purpose of the Commander-in-Chief to inaugurate this observance with the hope that it will be kept up from year to year, while a survivor of the war remains to honor the memory of his departed comrades. He earnestly desires the public press to lend its friendly aid in bringing to the notice of comrades in all parts of the country in time for simultaneous compliance therewith.
Department commanders will use efforts to make this order effective.
By order of

The Grand Army of the Republic was made up of veterans of the Union Army who had served in the Civil War. By 1890, the GAR had 490,000 members, and held an annual National Encampment every year from 1866 until its final encampment in Indianapolis in 1949. Seven years later, its last member, Albert Woolson, died, and the GAR was formally dissolved.

Don't simply treat the day as part of a warm three day weekend. Take a moment to reflect upon those men and women who have given the "last full measure of devotion" for their country. Decorate their graves. Visit their memorials. Raise the flag in their honor. Lift up their widows and orphans.