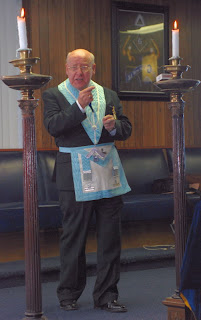 Trevor Stewart is a retired lecturer who was educated at Birmingham, Sheffield, Durham and Newcastle Universities. His academic work specialised in English eighteenth-century English literature and his doctoral research focused on a coterie of Enlightenment gentlemen freemasons who lived in the north of England.

Bro. Stewart continued to give fully documented papers on various masonic subjects in American, Belgian, French, German and Scottish lodges – at both lodge and Provincial Grand Lodge levels - as well as in many English Lodges, Royal Arch Chapters and in London’s ancient Guildhall. He has also taught in history seminars at Cambridge, Oxford and Harvard Universities (2004) which focused on newly discovered contributions made by early eighteenth-century English freemasons to the development and spread of ‘Newtonianism’. In October 2007 he was invited by the Pennsylvania Grand Lodge Masonic Academy to give his paper on ‘A Way Forward – some seminar techniques’. He was the keynote speaker at the 2010 annual dinner of the Philalethes Society in Minneapolis. He was invited by the Grand Lodge of Romania to address their May 2010 communication in Huniazilor Castle and by the National Grand Lodge of Greece in June 2010 at their communication in Athens.

Bro. Stewart contributed papers on Freemasonry in the Enlightenment period to international conferences held at the Canonbury Masonic Research Centre (London), the University of Bordeaux and the first and second international UK conferences on the history of Freemasonry in Edinburgh (2007 & 2009). He has published several papers in the annual transactions of the Quatuor Coronati Lodge (AQC) and of the Leicester Lodge of Research, in Hibiscus (GL of Florida) and in The Ashlar, the leading Scottish masonic quarterly. He edited two volumes of The Canonbury Papers (2005 & 2006) for the Canonbury Masonic Research Centre (London). He has published numerous lectures in bound pamphlet format, a world-renowned English translation of Martinez de Pasqually’s crucial esoteric text Treatise on the Reintegration of Beings; and he has recently published a fully illustrated monograph on the famous 1702 Haughfoot Lodge, which formerly existed in the Scottish Borders region. He is planning three new books on the hitherto unpublished non-masonic writings of William Hutchinson (1732-1814), the founder of English masonic symbolism.

In 2004 Bro. Stewart was appointed by the United Grand Lodge of England to be its Prestonian Lecturer. He is a Past Master of three English Lodges, including the Quatuor Coronati Lodge No. 2076 (English Constitution) and in June 2010 was installed as the Right Worshipful Master of Lodge ‘Sir Robert Moray’ No. 1641 (the leading Scottish research lodge - Edinburgh).

In December 2007 he was elected to Honorary Membership of both The Alpha Lodge No. 116 (New Jersey) and St. John’s Lodge No. 1 (New York City). He was elected subsequently to Honorary Memberships of the Cincinnati and the Atlas-Pythagoras Lodges (New Jersey) and he is particularly delighted to be associated so strongly with such distinguished New Jersey masonic bodies. He was created Right Worshipful Grand Lecturer (Honorary) by the Grand Lodge of New Jersey in September 2009. He was created a Ninth Grade (Magus) by the SRICF in Washington DC (February 2007). He edited ‘From Across the Water’ an anthology of eight past papers from AQC on North American Freemasonry in the colonial era (copies may still available from the Scottish Rite Research Society, Washington DC).

Bro. Stewart has held office in all of the Orders which grace the English Masonic landscape, is a Life Member of various Scottish Orders - including the Grand Lodge of the Royal Order of Scotland - has been honoured in the Rectified Scottish Rite in Belgium and in the Ancient and Accepted Scottish Rite in Germany. In SRIA he was a member of its High Council, a Chief Adept of a Province, the Director-General of Studies and an active member of its Executive Committee. He edited the SRIA Transactions (2005).

An application to join the Missouri Lodge of Research is available here. I had the honor of being the Truman Lecturer in 2009, along with my book Solomon's Builders featured as their bonus book for the year. The brethren of Missouri are doing great work. If you can make it to Columbia, be sure to stop at their Grand Lodge building and see their outstanding museum, which is one of the finest Masonic museums in the country.