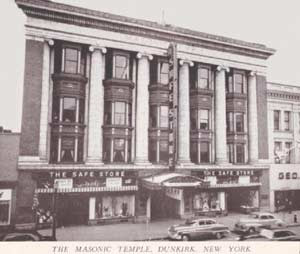 The Masonic temple in downtown Dunkirk, New York is almost gone. The 1909 building was heavily damaged by an electrical fire back in February. While some local residents and Dunkirk's mayor sought a way to at least save the facade of the historic building, engineers determined it was too heavily damaged to remain standing.

See the article End of an era on today's Observer website:

The Temple structure was completed in 1909, constructed on land purchased from Elizabeth Newton. Designed by architect J. Mills Platt of Rochester and constructed by the Meister Contracting Co., the cornerstone was laid June 27, 1908. Dwarfing the wood-frame structures that went up in the city in the 1850s, the Temple enjoyed a grand opening.

According to City Historian Robert Harris, the Temple was formally opened in 1909 with a grand ball attended by more than 1,400 people, with music provided by the 74th Regimental Orchestra of Buffalo. Joining the Masonic Lodge as first tenants of the building was the Safe Store, owned by Adolph Weinberg and having a staff of 75.

Over the years the building housed organizations from stores to churches to medical offices and fitness-related businesses. That all changed with the February fire that marked the beginning of the end for the familiar structure.

In early March fire investigators determined the fire was of accidental nature with an electrical problem the cause. According to the Chautauqua County Sheriff's Office, an electrical problem in the service disconnect located in the northwest corner of the building's basement sparked the fire. The city served a raze or repair order to the Temple's owners in the first week of March. 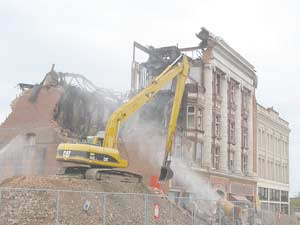