What is amazing about Freemasonry is its endless ability to adapt to suit the desires of its members. Instead of erupting into schisms, it simply expands.

Case in point: the 45th annual Rally of the National Camping Travelers was held the weekend of July 24th in Lebanon, Tennessee. National Camping Travelers is a Masonic family camping club that was formed in 1966 at Gettysburg, Pennsylvania by the late Brother Myron Fox and 21 other Masonic families. The idea was that a camping club for Freemasons and their families would be an added opportunity for fraternal fun and fellowship. Since then, Brother Fox's idea has spread throughout the continental United States and Canada.

Annual dues are $25 per family, with a new member initiation fee of $10. There are also local chapters that sponsor monthly camp outs, and dinner meetings or "camp-ins" when the weather is inhospitable outdoors. For instance, this month the Suwannee River Travelers Chapter #229 will spend 29 days on the Oregon Trail between August 2-30, 2010, starting in Independence, MO and ending in Mt. Hood, OR.

For more information, see the NCT website at www.gonct.org 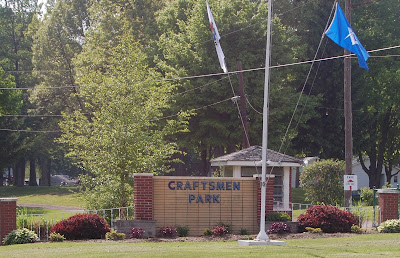 Interestingly, I also came across a Masonic camping park in Akron, Ohio. Craftsmen Park was created in 1933 to provide a facility to be used for camps for children. The present park was purchased in 1948, and is a 68-acre site on Rex Lake. The property is used by the Boy Scouts of America, many school band camps, church groups, Rotary International, Camp Quality, Capstone Masonic Youth Camp and the Masonic Model Student Assistance Program, as well as Ohio's Masonic Boys and Girls Camps. All of the voting members of the campground itself are Freemasons.
Posted by Christopher Hodapp at Saturday, August 07, 2010