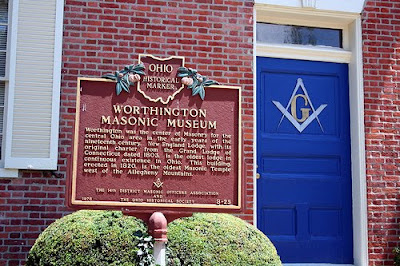 The Grand Lodge of Ohio F&AM is considering moving its offices and museum out of the 190-year old complex it shares with New England Lodge #4 in Worthington, Ohio. New England #4 has the oldest Masonic temple west of the Appalachian Mountains. Apparently, the Grand Lodge is now contemplating a move to the Dayton Masonic Center.

Grand Lodge moved to the Worthington location in 1953 from Cincinnati, in an effort to be located closer to the center of the state. Now they are seeking ways to cut costs. According to an article in the Columbus Dispatch, Grand Secretary Michael Watson says moving to the Dayton Masonic Center would cut annual operating and maintenance costs by $100,000. A 12-member advisory committee met Saturday to discuss the move in order to make a recommendation at the annual communication in October.

If they move, ownership of the Worthington site will fall to New England Lodge #4, which will then become responsible for the maintenance of the property. The Grand Secretary is not in favor of the move, and Worthington City Council president, Bro. Lou Goorey isn't happy about it either.

The Grand Lodge of Ohio F&AM has 108,000 members 513 lodges statewide. The 2010 annual communication will be Friday, October 15 and Saturday, October 16 at the Dayton Masonic Center.
Posted by Christopher Hodapp at Tuesday, August 10, 2010