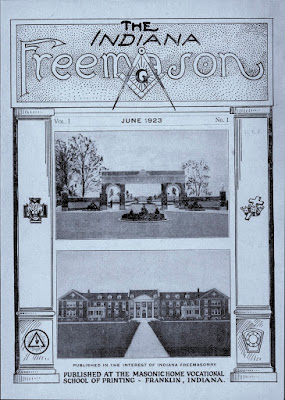 The Masonic Library and Museum of Indiana, in conjunction with the Indiana State Library, is now making available the complete collection of the Indiana Freemason Magazine from 1923 – 2003 for online access, as part of the Indiana Memory Project.

This searchable online collection of more than 39,000 pages will be a treasure trove for historians, genealogists and other researchers, and includes historical articles, photographs, current events, lists of lodges, plus Masonic members and officers involved in countless activities, and even advertising of businesses of the 20th century across Indiana.

The Indiana Freemason had several editors over the decades, but was especially dominated after WWII by noted Masonic historian, author, Past Grand Master and Past Grand Secretary, Dwight L. Smith.


Also included in the collection are approximately 900 pages of a selected number of local Masonic lodge histories from across the state, which were assembled around 1968. These frequently contain historical lists of former members and officers, along with telling the stories of lodges with their communities.

At the height of its membership in the 1950s, the Grand Lodge F&AM of Indiana had some 165,000 members, and was the fifth largest Masonic jurisdiction in the world. The magazine was originally created as the official publication of the Grand Lodge of Free and Accepted Masons in the State of Indiana in 1923 as a project of the in-house print shop within the Indiana Masonic Home in Franklin, now known as Compass Park. That professional printing facility was established partially as a vocational training program for some of the eventual 860 orphans of Freemasons who lived at the Home until 1975.

There are about 50,000 Freemasons in the Grand Lodge today.

The entire Grand Lodge of Indiana Collection can be accessed at the Indiana Memory Project website or by a link from the Library and Museum's website at www.mlmindiana.org

The Masonic Library and Museum of Indiana is located on the fifth floor of Indiana Freemasons Hall at 525 North Illinois Street in Indianapolis.
Posted by Christopher Hodapp at Wednesday, May 15, 2019