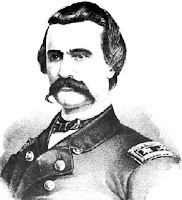 Tomorrow evening (Tuesday, June 1st), I will have the pleasure of speaking at Major General John A. Logan Lodge No. 575 in Indianapolis at their stated meeting at Indiana Freemasons' Hall, which begins at 6:30PM.

Logan Lodge was chartered in 1888, and is named after Major General John A. Logan, one of the most famous and popular Union Army generals of the Civil War. After the war, Logan became a fierce Republican, an Illinois senator, and presided over the impeachment trial of Andrew Johnson. He was a staunch supporter for the cause of Veterans, and was one of the primary advocates of creating Memorial Day as a national holiday (a day that is important all across America, but especially here in Indianapolis). In fact, in honor of General Logan and Memorial Day, the lodge held a Master Mason degree this morning. 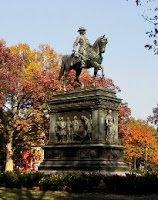 Logan Circle in D.C. is named after John A. Logan, and a beautiful equestrian statue of the general dominates the center of the neighborhood.

Many thanks to W:.B:. Fred Wade for the kind invitation. I am an honorary member of Logan Lodge, and it is always a terrific evening. The lodge will open at 6:30PM on the Entered Apprentice degree. The WM has relaxed the dress code for the evening from their normal Business/Casual, because of the summer heat in the building. Someday, we're going to have air conditioning, just as soon as we can dig up $2.5 million.
Written by Christopher Hodapp at 5/31/2010