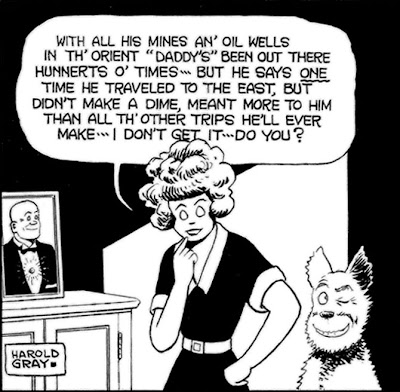 The long-running comic strip Annie is ending after 85 years, with the last cliffhanger installment on Sunday, June 13, if there's anyone out there who still knows what a newspaper is. Tribune Media Services says it is "taking Annie into the Internet age by pursuing new audiences for her in digital media."

Freemason Harold Lincoln Gray (1894-1968) created the strip originally as Little Orphan Annie on August 5, 1924, in the New York Daily News and later in the Chicago Tribune. According to the Grand Lodge of British Columbia & Yukon website, at its height it was syndicated in some 250 newspapers. It appears in just twenty today.

While few today would ever think the strip was controversial, at various times, Annie got herself involved with gangsters, vigilantes, pirates, evil labor union socialists, and even a plot involving the bombing of a German U-boat.
As the frame above illustrates, Oliver "Daddy" Warbucks was clearly a Freemason. So naturally he would care for an orphan.

Brother Gray continued to write and draw the comic strip up until his death in 1968. He was a charter member of Lombard Lodge No. 1098 in Lombard, Illinois in 1923.

Image from Grand Lodge of British Columbia & Yukon website: "With all his mines an' oil wells in the orient---Daddy's been out there hunnerts o' times---but he says one time he travelled to the East, but didn't make a dime, meant more to him than all th'other trips he'll ever make---I don't get it---do you?" Sandy the dog grins and winks knowingly. Cited by Alphonse Cerza in The Truth is Stranger than Fiction (1980), p. 20. Reproduced in California Freemason (Winter 1966).
Posted by Christopher Hodapp at Saturday, May 15, 2010