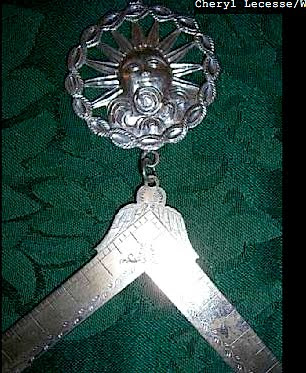 The brethren of Corinthian Lodge AF&AM in Concord, Massachusetts, may have uncovered real treasure in their archives. An article by WCVB-TV Channel 5 in Boston, "Mystery Mason 'Jewels' Made By Revere?" with photos by Cheryl Lecesse, describes a set of 18th century officer's jewels, possibly made by Paul Revere:

"We're excited. Proud. It links us again to the heritage that the lodge has," said Douglas Ellis, the senior deacon at the Corinthian Lodge in Concord, who said that about a year ago two members were doing some cleaning at the lodge and stumbled on a bag of antique-looking "jewels," the decorative medals Masons wear for ceremonial occasions.

"They thought they were just old regalia that had been tossed aside," said Ellis. "They were in a box up in a store room and we were like, 'Oh my. Look what we have here.'"

Suspecting that the jewels might be pretty valuable, last month they asked a visiting Mason from Spain who is something of a silver expert what he thought of the cache. He confirmed their hunch that the jewels very well may have been created by Paul Revere himself.

"We have the documentation that puts them at the date, 1797," said Ellis, referring to the year the Concord lodge was chartered, which was the same year Revere served as Grand Master.

It was also the same year that a set of jewels was donated to the Concord Lodge by its first Lodge Master, Dr. Isaac Hurd, who was initiated as a Freemason by none other than Revere, back in 1777.

"You know there was a very close tie between these two men," Ellis said, although he admits that it has been tough to say for sure that the jewels were made by Revere.

Subsequent examinations of the jewels made at the National Heritage Museum in Lexington and by the curator of the Revere silver collection at Boston's Museum Of Fine Arts show many similarities between the Concord lodge jewels and others known to have been made by Revere, but "there are also a lot of things that do not fit," said Ellis.

"There's a lot of mystery that's still out there," he said. "Although it's not conclusive, all the signs point in that direction." 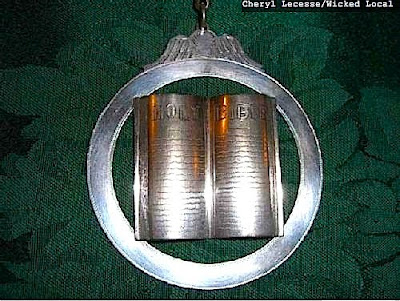 UPDATE:
A local TV story about the jewels can be seen here. 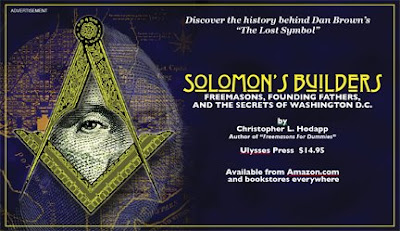 Hodapp's work is the first well written account of the philosophical thinking that led to the formation of a common man's democracy. This is the reference book that teachers need to read and public schools use in their American History classes.
Karl Grube, Ph.D.
Bonisteel Masonic Library, Ann Arbor, MI

Indeed, this is one of the better books that I have seen that credits Freemasonry where credit is due, while debunking many of the more common claims made by both Freemasons who wish to see Freemasonry's positive influence everywhere, and by our enemies who use it to reveal Freemasonry's insidious attempt at world domination.
Thomas W. Jackson
The Northern Light Magazine

What distinguishes SOLOMON’S BUILDERS from the good and bad, malicious and benevolent, is its honesty, humor and clarity . . . With books such as SOLOMON’S BUILDERS some day the astrological signs, mystical cross-streets and conspiracy mumbo-jumbo of Washington, D.C. will be in its proper place – among the astrology predictions, crosswords and Junior Jumble of the funny pages.
Mark A. Tabbert
Author, American Freemasons: Three Centuries of Building Communities

In SOLOMON’S BUILDERS, Hodapp brings us something a little different; an academically written book on the early days of American Freemasonry without the pretentious trappings of most scholarly treatments on the subject. The book is meaty without being overwhelming and yet contains sufficient end notes to back the claims and research that has gone into the project. But perhaps the greatest thing the book accomplishes is that it separates fact from fiction and will hopefully dispel some long held notions about the Founding Fathers, masonic symbols and the ever present eye in the pyramid on the dollar bill; many myths, which are willfully accepted by members of the fraternity.
Stephen Dafoe
Author, Nobly Born
Written by Christopher Hodapp at 5/25/2010