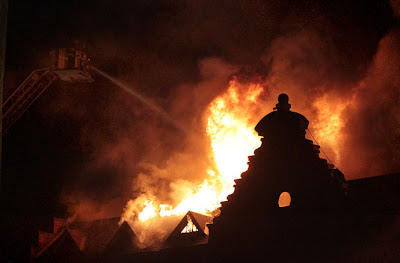 A century old Prince Hall Masonic Temple in Cleveland was destroyed by fire on Wednesday. Originally built for the Knights of Pythias in 1907, it was purchased in 1912 by the B'nai B'rith. Cleveland's Prince Hall Masons bought the building in 1954. They had moved out six years ago, but were attempting to raise money to restore the city landmark at 1624 East 55th Street.

W:.B:. William Walker of Cleveland, Worshipful Master of Ecclesiastes Lodge No. 120 PHA, said paperwork, paintings, personal information, historic artifacts and furniture were stored in the building and are now lost.

Ecclesiastes Lodge No. 120 was formed in 1961 by 31 members from a non-Price Hall Masonic Lodge named Jonathan Lodge No. 69, International Free and Accepted Masons. When the 55th Street temple was vacated, they moved to Shaffer Memorial United Methodist Church on Miles Avenue. 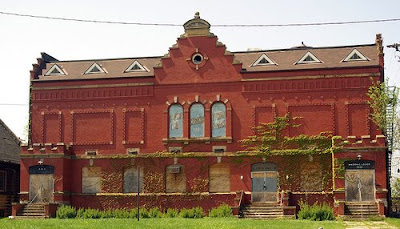 Before the fire.
From a May 20th Cleveland Plain Dealer article by Ellen Kleinerman:

"My heart was broken when I heard the news," said George Trumbo, a retired Cleveland municipal court judge, a member since the '40s.

"I felt dismayed," said Melvin Russell, deputy grand lecturer of the seventh Masonic District. He was in a meeting when he heard of the fire.

Prince Hall Masons had gathered in the building, deemed a Cleveland landmark in 1995, for more than 50 years.

Russell said Masons moved their meetings to another location about six years ago after the building was deemed unsafe.
According to city records, a section of the roof and wall in the rear of the property were collapsing in 2006.

Russell said the group was in the midst of deciding whether to repair or replace the structure.

"The historical significance was a major factor in our discussions," Russell said. The building contained lots of internal architecture unique to fraternal organizations, he said, but restoration can be costly.

The building was used more recently to store documents, historic artifacts and paintings, Russell said. Some portraits dated to the early 1900s when the building was owned by other fraternal groups, he said. 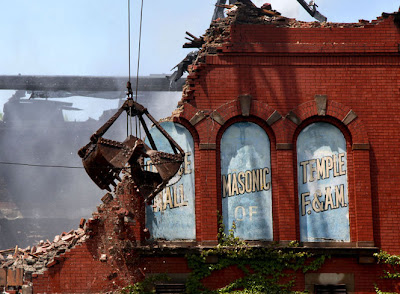 Police investigators have ruled the cause of the blaze as arson. Demolition began Thursday.
Photos from the Cleveland Plain Dealer.
at 5/22/2010