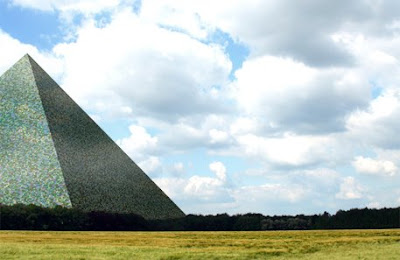 I give up. I'm tired of explaining the "unfinished pyramid" is NOT a Masonic symbol, and the only reason anybody thinks it is comes from a 1884 quote by Harvard Professor Eliot Norton, who said that the Great Seal of the United States with its unfinished pyramid was "practically incapable of effective treatment; it can hardly, (however artistically treated by the designer), look otherwise than as a dull emblem of a Masonic fraternity."

I've decided to embrace the pyramid. Especially the unfinished pyramid.

With that in mind, have a look at what may be the most ambitious building project in three thousand years. Plans are underway in Dessau, Germany to begin construction of a new pyramid for the ages. The German government has ponied up $90,000 in seed money (scarcely enough to print up the brochures) to begin construction of a 1,600 foot tall Great Pyramid, containing up to 5 million multi-colored blocks, filled with enthusiastic supporters' cremains. For a mere $900, your earthly ashes can be part of what looks, up close, like the world's largest lego sculpture.

Sign up at The Great Pyramid.org
Posted by Christopher Hodapp at Wednesday, December 03, 2008