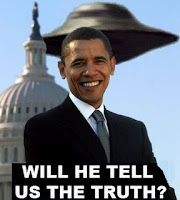 An organization calling itself the Extraterrestrial Phenomenon Political Action Committee (X-PPAC) has written to the President-Elect and demanded that he "end the six-decade truth embargo regarding an extraterrestrial presence engaging the human race".

The group is asking Obama to insist on a "full briefing from your military services and intelligence agencies regarding what they know" as well as open congressional hearings "to take testimony from scores of government witnesses who have already come forward with extraordinary evidence and are prepared to testify under oath."

X-PPAC believes they have at least two champions in Obama's incoming White House staff. Both John Podesta, who is running Mr Obama's White House transition team, and Bill Richardson, the Governor of New Mexico, who is expected to secure a cabinet post, have both professed public belief in UFO sightings.

From an article in the Telegraph yesterday:

Of course, us shape-shifting reptilian Freemasons will put a stop to THAT.

When he was the White House chief of staff under Bill Clinton, Mr Podesta led a project to declassify 800 million pages of intelligence documents. In a press conference, still available to watch on the YouTube website, Mr Podesta said: "It is time for the government to declassify records that are more than 25 years old and to provide scientists with data that will assist in determining the real nature of this phenomenon."

Gov Richardson, a former presidential candidate and fellow UFO aficionado, has written a forward to a book on the so-called Roswell Incident in New Mexico, where campaigners believe an alien spacecraft crash landed near the town of Roswell in 1947 and that the corpses of humanoid aliens have been kept hidden under lock and key by the government.
He has called for full disclosure by the Pentagon of what really occurred and reiterated his belief that there had been a "cover-up" during a presidential debate last year.

The campaigners, who want the truth "out there", believe that the British Government's decision to declassify thousands of UFO sighting documents this year has made it untenable for the US to maintain its policy of non-disclosure.
Only last week a US Air Force pilot, Milton Torres, whose testimony was released from the British archives, appeared on US television explaining how he was ordered to shoot down a large UFO over the UK in 1957 and then silenced by military officials, who told him never to speak of the incident.

Stephen Bassett, Executive Director of the Extraterrestrial Phenomenon Political Action Committee, expects to have gathered 40,000 signatures via email and fax by Mr Obama's inauguration day on Jan 20 in support of his calls for openness.