The following is self explantory and is forwarded to districts bordering the U.S and Ontario.
Please cause a check of all lodge registers in your respective districts to see if this individual has visited an Ontario lodge.

The Ontario lodge register could indicate a visitor from: Patmos No. 348, White Rose No. 706, York No. 266 or Zeredatha No 451 (all Pennsylvania). Any other pertinent information concerning the subject, please advise.

This Maryland request for assistance will be forwarded to Grand Secretaries, Canada wide.

Advise this office accordingly, upon completion of the Inquiry.

I greatly appreciate anything you can do to contact your membership in regards to the following individual. We have reason to believe prior to Johnson fleeing from police in the United States , he was attempting to make contact with Masonic Lodge members in Canada . Johnson is a Masonic member in PA and there is information that he was reaching out to Canadian members prior to fleeing in an attempt to make contacts and or possibly a place to stay. Johnson was last seen operating a blue 2006, Chevrolet Cobalt with Pennsylvania license plates. The license plate number is MB11785 and is a Masonic Temple organizational plate. However Johnson had several license plates in his possession and may not have the same license plate on his car. Please reach out to any contacts in your law enforcement community that may help us locate Mr. Johnson. 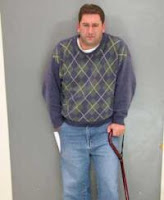 The following is a brief synopsis from the Americas Most Wanted website which I forwarded to you from their webpage.

On Nov. 2, 2008, Johnson posed as an active police officer, picking up a 21-year-old woman in Southeast Baltimore and telling her he was arresting her as part of a sting operation on prostitution in the area.

Johnson then handcuffed the woman to the back seat of his minivan and allegedly drove her to an isolated area, and told her he'd let her off the hook if she had sex with him. The victim was able to describe her attacker's van and give a license plate number.

Johnson was quickly linked to the attack, and on Dec. 1, 2008, at his home near Hanover , Pa , Johnson engaged police in a standoff at his home, surrendering only after two long hours of confrontation. Inside his house, many police IDs and badges from various agencies.

That should have been an indication of Johnson's refusal to go down for his alleged crime. But soon after his arrest, the accused rapist was released from custody on $100,000 bail.

Johnson Takes Off Before Court Date
Following his arrest and release, Johnson, a commissioner in Penn Township , Pa. , soon became a hot topic in the local press. When his photo was splashed across newspapers and televisions in the area, it was discovered Johnson's alleged Nov. 2 attack was not his first.

Two other victims, independent of one another, came forward claiming Johnson had done the exact same thing to them in September -- just a month before his alleged Baltimore attack. Both victims were from York , where Johnson held the title of police officer for four years. Police believe Johnson had traveled to York because he knows the area well.

Johnson took off after learning of the impending charges, failing to appear for his scheduled arraignment in early December.

We are doing everything we can to find Johnson, and believe he is likely a serial rapist.

Johnson targets women he believes to be prostitutes and uses the same method each time he strikes. We believe he's likely armed and dangerous and probably willing to do anything to stay free.

You cooperation is greatly appreciated.