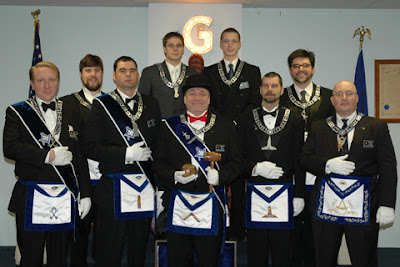 I've missed a whole lot of events over the last week due to my recent breakneck tour of the healthcare industry – Christmas with my family, parties, speaking at the Feast of St. John, a belated birthday celebration for my sister. In return, I got to spend a quiet Christmas Eve with my wife and dog in Room 203 of the cardiac unit, listening to the gentle gurgle of my draining lungs while visions of the Mortal Coil Shuffle danced in my head. But I'm missing my lodge's officer installation today, and I'm not happy about it.

Broad Ripple Lodge No. 643 is my Mother Lodge. It's where I got jabbed with a Steward's pike into an officer's chair two weeks after I was raised. It's where I was elected Master after two years as a Mason. I've seen it at its lowest ebb, against the ropes, devoid of anyone to put in a chair, and contemplating a vote for its own demise — which is how it ended up with a green rube sitting on Solomon's cushion in 2001. Likewise, my very closest friend Nathan Brindle, who joined with me and was raised the same day as I was, followed me a year later. Since then, I have served as Treasurer or Trustee, and Nathan has spent seven years as either Secretary or assisting the secretary from behind the scenes. For nine years the two of us have a running gag that we seem to always be the last guys out of the building to shut off the lights, check for gas leaks, and lock up the joint.

Broad Ripple Lodge isn't on the ropes anymore. Nine years after I joined, the lodge is active and alive, and I couldn't be prouder of these brethren. They have come together as brothers and friends and have accomplished just what Freemasonry is supposed to do: taken a disparate gaggle of men from every walk of life, every religious and political persuasion, every kind of educational and economic background, with nothing more in common than the shared experience of Hiram's journey, and forged lasting friendships.

Wbro. Willard V. Saylor, one of the proprietors of WT&T Fraternal Supplies in Franklin, is our new Master for 2008, and I really wanted to be there today for his installation by PGM Rick Elman, for a whole lot of reasons. But there's no shortage of qualified guys to sit in officers' chairs anymore, and Nathan and I no longer have to be the last guys out of the building. As vainglorious as it might sound, it's mentally the end of an era for both of us. And that's a good thing.

Bravo, lads. It's going to be a great year.