North Dakota to Charter Yellowstone Historic Lodge No. 88 in May 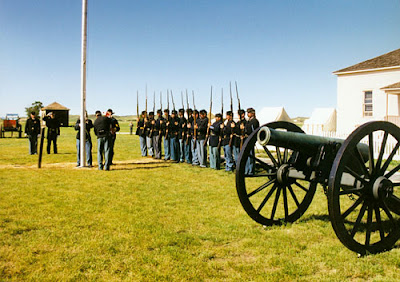 Historic Ft. Buford in North Dakota is located at the confluence of the Yellowstone and Missouri rivers. Lewis and Clark camped here in their exploration of the West. And it was here that Sitting Bull and his decimated Sioux followers surrendered in 1881. The fort itself closed in 1895, and is partially restored and run as an historic site by the North Dakota State Historical Society.

On May 21st and 22nd, 2010, the Grand Lodge of North Dakota will charter Yellowstone Historic Lodge No. 88 at Ft. Buford, about 20 miles southwest of Williston, ND. The first Masonic charter in what was to become North Dakota was issued to Yellowstone Lodge No. 88 by the Grand Lodge of Minnesota in 1872. It had a membership of 50 Brothers who were members of the 7th Cavalry at Ft. Buford, local businessmen, farmers and others. The story of Yellowstone No. 88 can be read here.

According to an article in in the MSA Notes from last September 2009 by Jim Savaloja, PGM and Associate Grand Historian, Grand Lodge of North Dakota:

These Brothers built an 80’ by 100’ two story Lodge Hall at the western edge of the Fort. The upper story was the Lodge room and the lower section was the social event center for the Fort and the surrounding community. This Lodge was active until 1874 when the Fort became dormant and the Charter was returned to the Grand Lodge of Minnesota. The Lodge building was sold and later dismantled.

The first Masonic charter issued to Prince Hall Masons in North Dakota was carried by the Buffalo Soldiers of the 25th Infantry, in 1892. The 25th Infantry was one of just four all-black units in the U.S. military at that time. Eureka Lodge No. 135 PHA was chartered as a military lodge by the Most Worshipful Prince Hall Grand Lodge of Missouri when the soldiers were stationed at Ft. Apache in the Arizona Territory in 1891.

On Friday, May 21st, the historical exhibit will open, followed by a barbecue at 6:20 PM. On Saturday, May 22nd, there will be a public opening and historic program at the Williston Airport International Inn from 10AM-12PM, with a rededication ceremony instituting the historic lodges between 2PM-4PM. A banquet will follow at 7PM at the International Airport Inn. This event is co-sponsored by the Grand Lodge of North Dakota A.F. & A.M, the Most Worshipful Prince Hall Grand Lodge of Missouri, the North Dakota State Historical Society, and the North Dakota Masonic Foundation.