Following the posting of the order of the Grand Master of Arkansas telling mainstream Masons there not to purchase Masonic license plates issued by the state, Sebastian Lodge #706 has had its charter revoked, and the lodge secretary, Brother Derek Gordon, has been suspended. The drama has played out on the Sebastian Lodge website at http://sebastianlodge.com, and the messages there have changed several times.

Sebastian Lodge allegedly had its charter revoked because the website contained Masonic information from lectures the Grand Lodge deemed either secret or otherwise inappropriate for public viewing, and not because of its posting of the Grand Master's license plate order. Gordon claims the inappropriate material was taken from other Arkansas lodge websites, which have not been suspended.

Gordon has posted his side of the events at http://derekgordon.com/letter-to-masons. It says, in part:

Our charter was revoked for being un-Masonic as to our website. I, Derek Gordon, apologize for mentioning the order to not purchase license plates. As the order said, all members must be notified. This seemed to be a great way to get it there as many members visited.

I, being secretary, webmaster, legal domain owner, and creator of this website, never meant to upset Grand Lodge. Rather, I sought to protect our lodge because so many saw the letter as racist. I realize it was not meant to taken that way, but its poor penmanship didn’t get the proper message across. Other Arkansas lodges have the same kind of post, yet they still have their charter. Some Arkansas lodges and members have posted the entire letter from the Grand Secretary online and those too have yet to see punishment.

*REGARDING other information supplied and provided on the Sebastian Lodge website,
it was all found on other Arkansas lodge websites. Some of those were created as far back as 2001; this site was created in May of 2009. I never typed a single word regarding the lectures and Masonic history. The page source-code made light of that. I posted the Masonic informatoin because it had been written by and posted on other Arkansas lodge websites for years; I thought it must be acceptable by precedent. As a Mason of 2.5 years, I was foolish to believe that if other lodges are allowed to do something (created by Masons who have been in much longer than I have), it would be acceptable for our lodge to display as well.

To my former brethren of Sebastian Lodge, I apologize to you for this instance. I felt that we were safe after finding the post on so many other sites. There’s much more to the story, but out of respect for Masonry and for the title of Grand Master and the Grand Lodge I will humbly refrain.

I further urge all Masons to support Sebastian Lodge in reobtaining its charter. By this I outline that I was doing what was seen as acceptable by precedent. The lodge itself was not involved in this directly. I am ashamed at the outcome.

UPDATE: Currently, I’m awaiting a Masonic trial for expulsion that I probably can’t attend do to conflicts with military obligations while serving our great country . It is scheduled for the weekend of April 17th, 2010. I will do my best to travel the more than 800 total miles to attend this if I can be let off. The Grand Master informed me via telephone on March 27th at 9:50pm that it will be that date, it won’t be rescheduled, and to find someone to take my place. It didn’t matter that I’m the one with the information and evidence to secure my good name.

Should you wish to contact me, it is possible by emailing webmaster706@sebastianlodge.com at your convenience.

The letter of charges against Brother Gordon has been posted on The Burning Taper website, and does not refer to anything concerning the lodge's website. He is a member of the Arkansas National Guard, and the trial date was set for a weekend of mandatory participation in Guard maneuvers. Grand Lodge will not change the date.

The statement concerning license plates has also been removed from the Boone Lodge #314 website. It had read:


NOTICE: Grand Lodge of Arkansas has declared that no Arkansas Freemason is to purchase a Masonic Arkansas license plate. These are for Prince Hall Masons, which Arkansas considers to be clandestine lodges.

This notice fulfills the requirement of the Grand Lodge of Arkansas for each subordinated Lodge to inform their members.

The publishing of this notice does not necessarily reflect the views of Boone Lodge or its members.

Brother Fred Milliken has done a thorough explanation of the events and timetable of the actions concerning Sebastian Lodge and Brother Gordon. Read it here.

Interesting to note that Sebastian Lodge allegedly had its charter pulled for violation of a new rule passed one month before by GL that was sent to the lodge in the same packet as Gordon's charges.

It is also interesting to note that Brother Gordon had tried to form a committee for Prince Hall recognition, but was informed by the the Grand Master that Arkansas' Prince Hall Masons did not desire to have anything to do with the Grand Lodge of Arkansas AF & AM.

BTW, here is a copy of the letter sent by the Grand Secretary concerning the license plate issue, and informing brethren not to purchase one because, you know, Prince Hall... 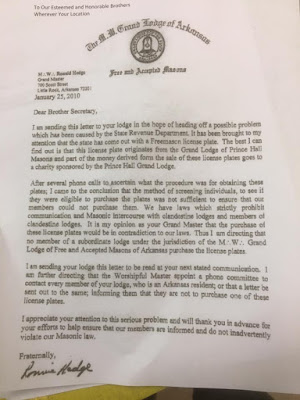