Past Pro GM of the United GL of England Passes 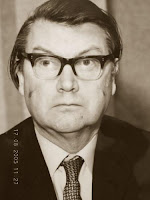 MW Brother, the Right Honourable Lord Cornwallis (Fiennes Neil Wykeham Cornwallis), Officer of the Order of the British Empire (OBE), Deputy Lieutenant of Kent (DL), Pro Grand Master of the United Grand Lodge of England between 1982 and 1991, passed to the Grand Lodge Above on March 6th, 2010.

He was was educated at Eton College. During WWII, he served with the Coldstream Guards between 1940 and 1944. He succeeded to the title of 3rd Baron Cornwallis in 1982.

It has been ordered by the MW Grand Master of the United Grand Lodge of England that Masonic Mourning shall consist of the printing of an `In Memoriam' notice on the first summons issued for a meeting of each Lodge under the Grand Lodge; and that the members of each Lodge shall stand in memory of Bro Lord Cornwallis at its next meeting immediately after the Lodge has been opened and before any business is transacted (except for the reading of any dispensation required to regularise the holding of the meeting).