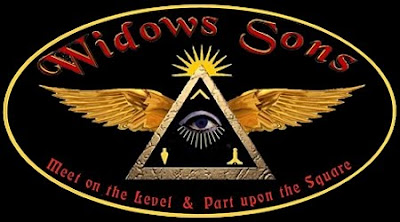 The Grand Master of the Grand Lodge of Georgia F&AM, Donald C. Combs, has just issued an edict in his state (No. 2022-2) forbidding the Freemasons in his jurisdiction from belonging to the Widows Sons International Masonic motorcycle riders association. Georgia Masons who do not comply by dropping their WS membership risk expulsion from the fraternity. Further, the edict orders ALL Masonic-related motorcycle clubs and associations in Georgia to disband, with the exception of motorcycle clubs affiliated with the Shrine. (Click images below to enlarge.) 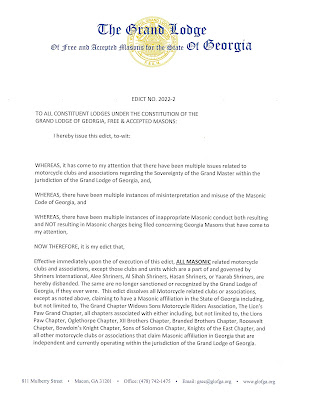 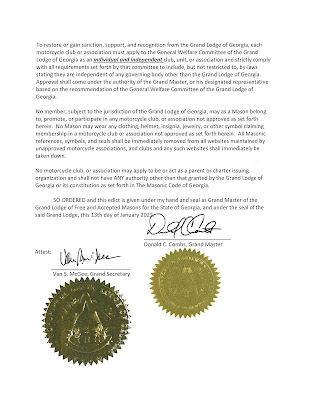 This is not the first time this has happened in the U.S.

Back in 1998, a group of Masons who shared a love of motorcycles organized the first chapter of the Widow’s Sons Masonic motorcycle riders club, led by Brother Carl Davenport out of Chicago, Illinois. Open to all Master Masons, the goal of the Widows Sons was (and is) to promote motorcycle riding among Masons, and to promote Masonic membership among the general public. They regularly support and contribute to Masonic programs that help widows and orphans of Brother Masons. But almost from the outset, there was a cohort of Masons who strongly objected to the public image of the Widow’s Sons, and criticized the group’s first logo design, patches and leather vests as looking entirely too much like an unsavory outlaw motorcycle gang. 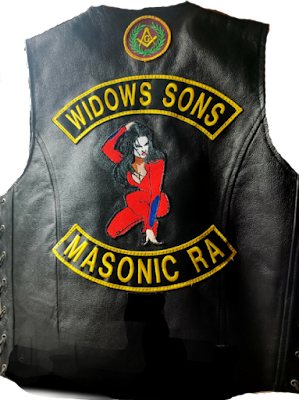 Original logo for the Widows Sons included a sultry, red leather-clad 'Widow.'
(Image from Hiram's Knights website)
Their early vests often featured a Masonic square and compass, and a common objection was that Masonic symbols would be seen in bars on brethren who may not be able to subdue their passions. It was especially objected to in states where a grand lodge forbade Masons from serving and consuming alcohol at lodge functions. And their earliest logo featured a sultry 'widow' dressed in red leathers looking entirely too MILF-like. By the early 2000s, several grand masters around the U.S. issued decisions and edicts against the group, and in more than a few cases, ordered the groups to completely shut down, threatening expulsion for Masons who defied these orders. Other states forbade the wearing of Widows Sons signature leather vests in Craft lodge meetings.

(See Grand Master of Texas Edict: Widow's Sons Motorcycle Group from 2011; I don’t believe that anything has changed in Texas since then concerning Masonic biker groups.) 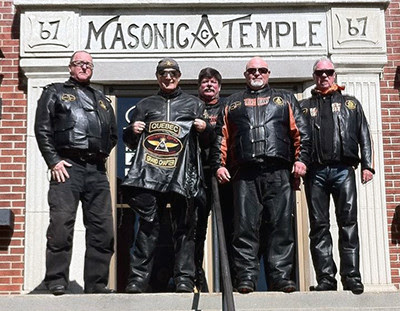 Photo: widowssonsinternational.com
Unfortunately, Masonic motorcycle associations have always - and continue to attract - extra scrutiny from critics and more than a few grand masters. Motorcycle-riding GMs in general have no issues with them, but plenty of other GMs find them problematic, asserting that motorcycle clubs of any kind attract an unsavory sort of man and are antithetical to the upstanding image that Freemasons have historically cultivated. There are also allegations that the state grand chapters of the Widows Sons set themselves up as a conflict of interest with grand lodges.
Over the last couple of hundred years or so, enthusiastic Masons have often sought to form special interest clubs or groups with like-minded brethren based on their professions, hobbies, or obsessions. There are Masonic veterans’ groups (National Sojourners), fishing clubs, gun clubs (like Hiram's Rangers Western action shooters club), stamp-collecting groups (Masonic Philatelic Club), RV owners (National Camping Travelers ), Masonic luncheon groups (like High Twelve International), and lots more. The most obvious manifestation of this phenomenon can be seen in the Shrine. Upon joining a local Shriners temple, new members are often encouraged to join and participate in a specific affinity group like the clowns, Masonic or Shriner degree teams, little car drivers, classic car enthusiasts, model railroad clubs, boat owners, private plane pilots (the “Flying Fezes”), and often one of the most popular, motorcycle riders.
Other states have managed over the years to hammer out agreements between their grand lodges and the Widows Sons, so hopefully this will be a brief incident.
UPDATED 1/27/2022 9:00PM
A closer reading of the edict gives a better sense of what it is attempting to address. From his edict I took away that the GL of GA must officially recognize or authorize any group calling itself ‘Masonic,’ and that the entire collection of clubs being disbanded or forbidden never bothered to officially get those approvals. I believe he’s saying, ‘Clean up your act, decide if you want to be Masonic, and apply for approval with the proper committee. Let’s do this right instead of ignoring the GA code and procedures.’
Posted by Christopher Hodapp at Thursday, January 27, 2022