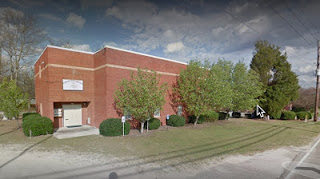 Lexington Lodge 152 in Lexington, South Carolina took its battle with their town public this week. In recent months, the Town of Lexington has been attempting to acquire the lodge's property to use as an overflow parking lot for a proposed downtown Springhill Suites by Marriott hotel. The story originally came to light in September when the first sabers were rattled by the mention of the use of eminent domain by the town to seize the property at or below market price. Lexington originally offered $300,000 for the lodge property, which was immediately laughed out of the park by lodge officers and trustees. (See SC Lodge Battling Over Eminent Domain HERE)

On October 28th, Lexington Lodge's Secretary, Charles D. (Dick) Keyser posted a public letter (read it HERE) revealing details of discussions with the town and their current position. According to his letter, the the town attempted to hide its initial purpose by offering out of the blue to "pave the lodge parking lot for free" without disclosing the Marriott deal. When news of the Marriott development leaked, the lodge seemed to be in the way of bigger forces.

Lexington lodge 152 has owned and been located on the same property for almost 150 years. It was chartered at this location in 1869, eight years before the town itself was officially established. They intend to stay there "for Eternity." 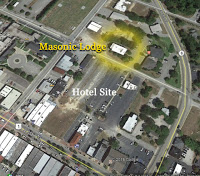 The lodge has estimated a replacement cost to relocate and build a new temple of approximately $1.5 million, while the City has counter offered just $450,000. Keyser wrote that the lodge has told the town council that, "if the relocation cost were less than $1,500,000, any money left, minus $20,000, would be returned to the Town of Lexington. The $20,000 would be donated equally between Lexington Interfaith Community Services (LICS) and the Shriner’s Hospital for Children by the Town of Lexington and Lexington Masonic Lodge 152."

In response, the town's mayor, Steve MacDougall reportedly said in an executive session of the town council, "Condemn it."

MacDougall denied the account on Facebook, and has now dragged the lodge negotiations into the heated local political race for Mayor.

From today's The State article, "Could a 149-year-old Mason lodge become a parking lot?": 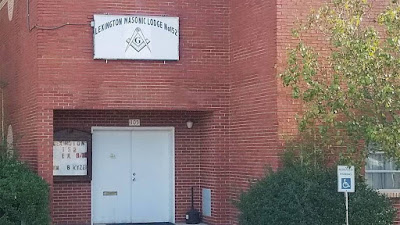 That prompted MacDougall to post a statement on Facebook denying the Masons’ accusation. He also accused Town Council member Ron Williams, who is challenging MacDougall in Tuesday’s mayoral election, of sharing private council discussions with the Masons and advising them to sue the town.

Williams said he does not remember any conversation during which he advised the Masons to sue the town. However, Williams said he did tell them that if the town tried to take the lodge, he would be on their side.

“My job is to represent the citizens of the town, not the town interests,” Williams said. “If I feel any citizen of the town is being taken advantage of by the town, I’m going to defend that citizen.”

Williams wrote in an email that he has hired an attorney “to verify I have done nothing wrong.”

“Steve MacDougall wants me out of the race and he’s shown publicly and in private that he is willing to do anything to keep his seat,” he said.

Randy Browning, a member and past master of the lodge, which houses one of the longest-standing charitable organizations in Lexington, told The State the town was trying to use the lodge property in one way or another to benefit an incoming Marriott hotel that is slated for a nearby plot of land. Williams said that when the lodge conversation first came up in council, he did not have knowledge of the incoming hotel, though MacDougall had been in talks with developers.

MacDougall would not say if he generally supports using eminent domain — the right of government to take over property in the interest of public use — for economic development. Most council members said they would not support use of eminent domain.
Though it has been in the same spot since 1869 — eight years after the town was founded — the lodge is not protected by a historic or preservation designation, Browning said, because the organization didn’t think it was necessary.

“Who would expect that somebody would want to come in and just take over your facility?” he said.

MacDougall said in an interview this week that the Masons have not responded to the town’s latest offer: to pave the parking lot, plus a piece of a neighboring lot to be used for hotel parking and allowing the members to use select spaces. The Masons set a deadline to respond by Dec. 31, MacDougall said. Yet in the open letter on the watchdog blog, the offer is called “unacceptable.”

MacDougall, in his Facebook post published Oct. 30, said that taking the property through eminent domain has been discussed, but that option always is considered when town officials negotiate a land deal. The post said the council agreed that condemning the property “was NOT an option.”

The mayor went on to say Williams “broke his oath” of office by telling the Masons after a closed-door town council meeting that they should “sue the town.”

MacDougall said he learned about Williams’ conversation with the Masons from one of their members, and that the conversation was the reason for the Masons questioning the town’s motives, which led to tense discussions.

The Masons could not be reached for comment about negotiations.