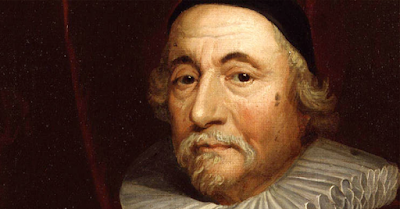 In the 1650s, Archbishop James Ussher of the Church of Ireland, set out to calculate the exact date of God's creation of the world. Using the biblical account along with a comparison of Middle Eastern histories, Hebrew genealogy, and other known events, he determined that the Earth was created on Sunday, October 23, 4004 B.C.

No, Daylight Saving Time was not specified.

Ussher's claim was detailed in his massive volume, Annals of the World, which was published in 1658, two years after his death. A meticulous researcher, compiler and Bible scholar, Ussher used the date of Nebuchadnezzar as a historical reference point, and traced the biblical genealogies backward from there to arrive at a date for creation. He spent five years traveling Europe, seeking historical documents and other writings to aid in his research. He then compiled his collection of world events and biblical events in chronological order. 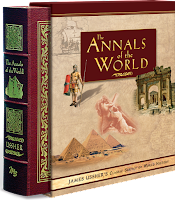 Master Books published a beautiful hardback edition of Ussher's Annals back in 2003. Few modern readers have had the opportunity to read the book, which sets out Ussher's determination of exact dates and times of every major and minor event depicted in the Old and New Testaments.

Ussher was an intensely devout man in a turbulent time, and daring to calculate the date of the Creation was deemed heretical by some theologians at the time. It was an uneasy transition period as the scientific preoccupations of the Enlightenment were frequently clashing with the established religious dogma of the past. So it made sense that Ussher's work was posthumously released. Nevertheless, his establishment of this important date was eagerly accepted by the Christian world in a remarkably short period of time.

Ussher called his dated calendar Anno Mundi, the 'Year of the World.' Ussher and Lightfoot’s calculations of the exact date and time of the Creation were soon widely accepted as fact by most Christian denominations. Beginning in 1701, new editions of the King James Bible clearly stated it right up front in an added introduction that was not part of the biblical text, but might as well have been as far as readers were concerned. Up until the evolutionary theories of Charles Darwin were popularized, many Christians (and Jewish scholars as well) were firmly convinced that the Earth was no more than about 6,000 years old.

Because Ussher’s Creation date was so strongly believed by the time of modern Freemasonry’s origin in 1717, Masons began dating documents using 4004 B.C. as their beginning year . . . sort of. 4004 was an inconvenient number to remember, so Masons simply took the current year and added 4,000 to it. So, 1717 became 5717, and today 2018 becomes 6018 Anno Lucis, or A.L., since Anno Lucis means “Year of Light” in Latin. Masons called it that to coincide with the Genesis passage, “And God said, ‘Let there be light’; and there was light.” They did this early on to lend the fraternity an air of greater, more solemn antiquity. If they dated their documents as being 5,717 years old, they’d certainly sound more respectable and impressive than some newly formed London drinking club. Thus, today you will often see two dates on Masonic cornerstones—both A.D. and A.L.

Meanwhile, the Royal Arch, Cryptic Masons, Knights Templar, and the Scottish Rite all have their own different calendars and dating systems. But that's a different post. For more about the many differing calendars you will encounter throughout Masonic appendant bodies, have a look at my earlier entry, Happy A.D. 2018 - A.L. 6018!