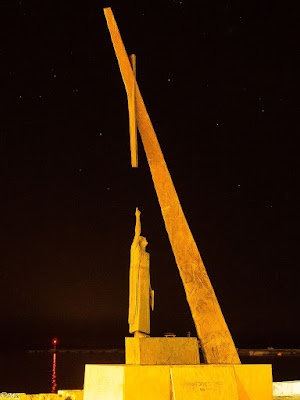 On a small jetty at the eastern edge of the Old Port of Pythagorio on the Greek island of Samos there stands a unique statue with its back to the Aegean Sea. The sculpture was created in 1988 by Nikos Icarus (Νίκος Ίκαρης, 1920-1994) from the neighbouring island of Ikaria. It is a monument to the ancient Ionian mathematician and philosopher, Pythagoras, who is believed to have been born on the island in around 570 BC.

The triangular form of the sculpture is a graphic representation of the Pythagorean Theorem, and the base and hypotenuse are covered with symbols alluding to scientific and
philosophical theories attibuted to Pythagoras. It is to this remarkable man that the Western world owes the concepts of immortality via the transmigration of souls; the identification of the planet Venus as both the morning and evening star; the first mathematical proofs of the Earth's spherical shape; mathematical descriptions of planetary movements as the "music of the spheres"; and of course, the Pythagorean Theorem, which commonly appears in many Masonic jurisdictions' degree lectures, paired with Euclid's later proof of it (the 47th Proposition of Euclid). 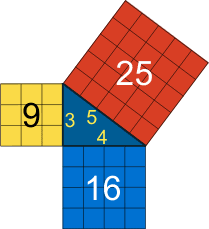 Such is the importance of the symbol that it is widely incorporated in many states and countries as the jewel for a Past Master of a lodge. 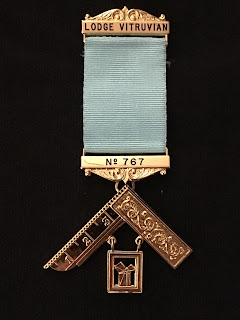 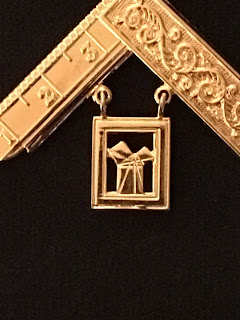 The symbol, along with its somewhat tortured, incomplete, and certainly muddled historical reference to Pythagoras, Euclid, Eureka!, and the sacrificing of a hecatomb upon its discovery, were likely first introduced into Masonic ritual by way of Thomas Smith Webb's Freemason's Monitor or Illustrations of Masonry in 1815.

(47th) In every right angle triangle the square on the hypotenuse is equal to the sum of the squares on the other two sides.

This theorem has been called the root of all geometry and the cornerstone of mathematics. The practical applications alone are worthy of the high esteem that Masonry affords it. And this is the interpretation of the lecture that is most considered when masons speak of it But the meaning of this hieroglyphical emblem does not stop there.

The emblem we are usually presented is the 3,4,5 right triangle in this fashion: The vertical line is of 3 units, the horizontal is of 4 units, and the hypotenuse is of 5 units. Not only is our attention called to this geometrical figure in the Master Mason degree, it is also prominent in the Scottish Rite in the 20th Degree - Master of the Symbolic Lodge and in the 25th Degree - Knight of the Brazen Serpent. Rex Hutchens, commenting upon the 20th Degree in his book on the Scottish Rite explains that:

"Nine is a perfect number, being the triple of three. There are nine candles in three groups of three each on the East, West, and South of the Altar. They form a graphic representation of the 47th Problem It makes no difference in the equation if the other two angles are 45 degrees each or 30 degrees and 60 degrees or 5 degrees and 85 degrees. Because of the mystic meaning associated with numbers by the ancients, they considered the most beautiful triangle of all, the right angled triangle with sides of 3,4 and 5 units of measure." (Rex Hutchens, The Bridge to light, p.171)

In the 25th Degree commentary Hutchens describes the setting of this degree:

The evidence that the particular triangle alluded to in the Monitor is the 3,4,5 right triangle can be derived from the odd comments about Pythagoras' exclamation "Eureka" in the Grecian language. Here is where we can begin to apply the investigative tools of what is called gematria. As you know the ancient letters were also numbers. The correlation of numbers with letters gave ample opportunity to nest hidden meaning within words, phrases, and names. For example, if we take the word "Eureka" in Greek and consider the letters as numbers instead of letters, add them up to get a total value we get 534 - the units of this special triangle. 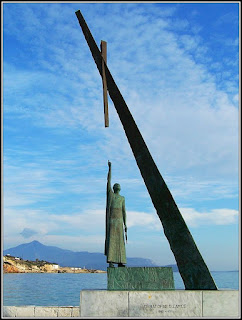