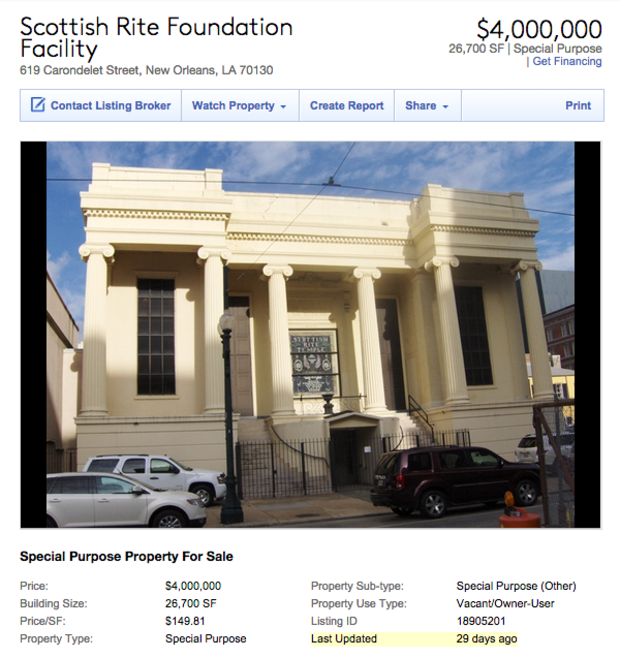 Another one gone. From the New Orleans Times Picayune today:


The historic 162-year-old Scottish Rite Temple downtown sold to a local developer for $3.25 million last month, ending the Freemason's 110 years of ownership.
The Greek revival style building one block from Lafayette Square at 619 Carondelet St. was built in 1853 as a First United Methodist Church. The New Orleans Scottish Rite group bought the property in 1905 and has owned it ever since.
The sale was completed Dec. 26 and recorded in Orleans Parish records this week.
The New Orleans Scottish Rite of Freemasonry couldn't immediately be reached for comment Wednesday. The seller was listed as New Orleans Scottish Rite Foundation Inc. Corporate Realty brokered the deal.
The buyer is listed as CDB Carondelet LLC represented by local developer Craig Boes, who couldn't immediatley be reached for comment.
The 18,200-square-foot temple houses a first-floor full service kitchen and space for 100 diners, according to a property listing. A second-floor auditorium has seating for more than 360 people under a 30-foot ceiling.
The sale also includes an annex built in the late 1970s, which served as administrative offices.
Posted by Christopher Hodapp at Wednesday, January 14, 2015