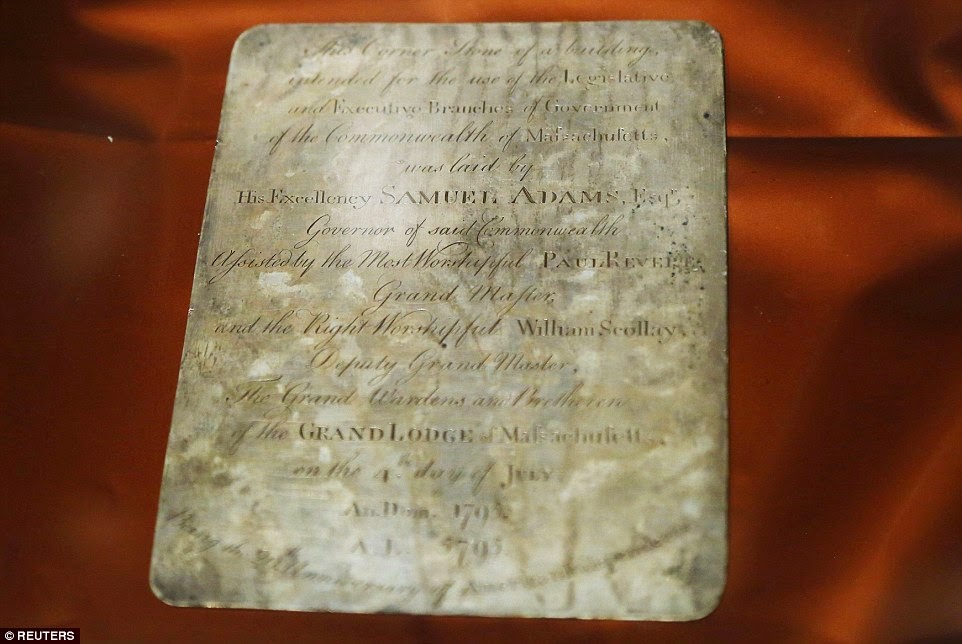 From Bostoninno on 12/12/2014. The box was opened today and included just what the Grand Lodge said it did.

On Sunday, December 14, the Museum of Fine Arts will x-ray the time capsule found in the cornerstone of the Massachusetts State House. Though the Commonwealth of Massachusetts has a good idea of what's inside the small lead box based on state records, the Freemason Grand Lodge of Massachusetts knows for sure.  After all, they inserted the items.

Though Samuel Adams was the Governor of Massachusetts when the cornerstone of the State House was laid, he invited the Grand Lodge to conduct a traditional cornerstone ceremony. The Grand Master at the time was his old buddy, fellow patriot and midnight rider Paul Revere.

According to Robert Huke, Revere "deposited under it a number of gold, silver and copper coins, and a silver plate" bearing the following inscription:

"This Corner-stone intended for the use of the Legislature and Executive Branches of Government of the Commonwealth of Massachusetts was laid by His Excellency Samuel Adams, Esq’r, Governor of said Commonwealth assisted by the Most Worshipful Paul Revere, Grand Master; and Right Worshipful Wm. Scollay, Deputy Grad Master; The Grand Wardens and Brethren of the Grand Lodge of Massachusetts.

Revere also spoke at the ceremony. He lauded the fact that the nation was essentially born from Massachusetts and that it's governed by laws as opposed to people, urging people not to take that for granted and to live as good citizens.
His words, though perhaps a bit difficult to decipher in some spots, for the most part ring true to this day:

"Worshipful Brethren, I congratulate you on this auspicious day: — when the Arts and Sciences are establishing themselves in our happy Country, a Country distinguished from the rest of the World, by being a Government of Laws. — Where Liberty has found a Safe and Secure abode, — and where her Sons are determined to support and protect her.

"Brethren, we are called this day by our Venerable + patriotic Governor, his Excellency Samuel Adams, to Assist him in laying the Corner Stone of a Building to be erected for the use of the Legislature and Executive branches of Government of this Commonwealth. May we my Brethren, so Square our Actions thro life as to shew to the World of Mankind, that we mean to live within the Compass of Good Citizens that we wish to Stand upon a Level with them that when we part we may be admitted into that Temple where Reigns Silence & peace"

In 1855, when making emergency repairs to the State House, workers came across the time capsule accidentally. Using the silver plate, they were able to include another engraving:
The Corner Stone of the Capitol having been removed in consequence of alteration and additions to the building the original deposit, together with this inscription, – is replaced by.

"The Most Worshipful Winslow Lewis, M.D., Grand Master, The other Officers and Brethren of The Grand Lodge of Massachusetts, in presence of – His Excellancy Henry J. Gardner, Governor of the Commonwealth, on the 11th day of August, A.D. 1855. A.L. 5855"

It appears that the time capsule contents aren't quite as extensive as the ones found in the statue of the lion that overlooks the Old State House (not to be confused with the Beacon Hill State House) which contained letters, photos, receipts, buttons, pins and a book on foreign relations. It was first installed in 1901.

The coins in the freshly discovered time capsule could date back as far as 1652.
We'll get confirmation of the items from the Museum of Fine Arts once they're done with their examinations.
Posted by Christopher Hodapp at Wednesday, January 07, 2015