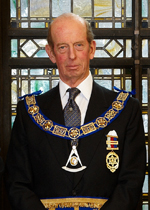 The Grand Master of the United Grand Lodge of England, the Duke of Kent, has suffered a mild stroke after being struck by an illness. The 77-year-old royal was taken to an undisclosed hospital in London on Monday. A Buckingham Palace spokesman said, "He's still being assessed and it's not thought to be serious. My understanding is he's feeling well and looking forward to resuming official engagements as soon as possible."

Prince Edward George Nicholas Paul Patrick was born in 1935, and educated at Eton and Le Rosey, Switzerland. He is a cousin both of the Queen and of the Duke of Edinburgh. His father, who was Grand Master from 1939 until 1942, was the fourth son of King George V, and his mother, Princess Marina, was the daughter of Prince Nicholas of Greece. He has been the Grand Master of the United Grand Lodge of England since he was first elected in 1967.
Posted by Christopher Hodapp at Friday, March 22, 2013