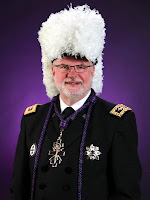 Congratulations to Sir Knight David D. Goodwin, Most Eminent Grand Master of the Grand Encampment of Knights Templar of the United States on his installation this past week at the Triennial in Alexandria, Virginia.

David Dixon Goodwin was born on August 15, 1949, in Johnson City, New York and graduated from Union University, Albany (NY) College of Pharmacy in 1972 with a B.S. in Pharmacy. He married Marci Lynn Sternberg on July 15, 1979. They have two daughters, Jennifer and Samantha.

I really wanted to be there this year, but it wasn't in the budget for me this time.

The Grand Priory of the Reformed and Rectified Rite of the United States of America (CBCS), a body of the Grand Encampment of Knights Templar of the USA, initiated 27 new members as Perfect Masters of St. Andrews, while visiting dignitaries Christian Bindewald and Pierre Noel of Belgium, and Bill Koon and Piers Vaughan looked on. Following the conferral, David Goodwin was installed as National Grand Master. 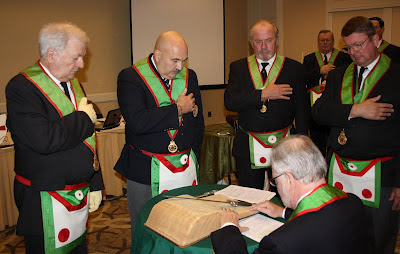 One of the first items of business was a resolution declaring those who take membership in un-recognized orders after the date of adoption, upon their membership being known would be issued a letter giving them 30 days to submit a letter of withdrawal from the Order, or they would be issued a permanent demit from Templary under the Grand Encampment. It passed with only two negative votes out of 364. A second resolution adopted the Grand Priory as an official appendant order of the Grand Encampment. It passed with only 10-12 negative votes. Pierre Noel in his remarks pointed out that he was here to honor the good relationship his Priory had with the GEKT.

On Tuesday evening, Christian, Pierre, and John Palmer (Editor of the Knights Templar Magazine) were presented with the Knights Grand Cross, and it was announced that Michael Buckley would receive it in England.

Huzzahs to David and his entire line of officers, as well as to Sir Knight William H. Koon for his extended term as Grand Master. I personally want to thank Billy for the kindness he has shown me over the last year and a half while I wrestled with my own personal health challenges. He has much from his term to be proud of.

I look forward to great things happening under Sir Knight David's leadership and his officers.
Note: I don't know the results of the drill team competition. If anyone wants to forward them to me at hodapp@aol.com I will be happy to update this entry with them.