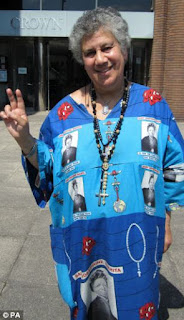 A Catholic nun has been accused of sending threatening letters containing a white powder to several notable people in the UK, accusing them of being devil worshipping Freemasons, including Deputy Prime Minister Nick Clegg.


A Catholic nun is alleged to have sent six envelopes containing white powder to parliamentary figures including Deputy Prime Minister Nick Clegg, a court heard today. The defendant, who is known as Sister Ruth Augustus, is accused of scrawling 'devil worshipping' on envelopes filled with white powder that she posted to Nick Clegg and Baroness Scotland, Harrow Crown Court was told.

The letters were intercepted, three at a time on two separate occasions, at a mail screening centre and the powder was found to be non hazardous, the court heard.

Mark Kimsey, prosecuting, said Augustus accepts that she sent envelopes with letters in them but says police put the white powder in them.

A worker was checking mail at 5.30am when three envelopes raised concerns. One was addressed to Mr Clegg and on the envelope was written 'devil worshipping', 'freemason', 'sex with thirty plus women' and 'your poor Catholic wife and children'. The second was to Baroness Scotland, and had a swastika on it, and two crosses, and 'stop this evil devil worshipping'.

The envelopes contained a gritty substance, but it was found they had already tested negative for anthrax, and specialist police who were called in found them to be non hazardous.


In a later article Sister Augustus was quoted:


The jury heard that she told interviewing officer Detective Constable Anne Adams: 'The police are run by freemasons. All the top women are in it.'

I love that she's throwing a peace sign in her photo. Thanks, sister.