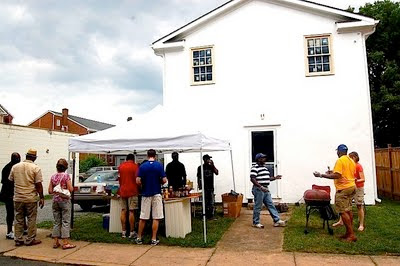 When the Prince Hall Freemasons of Leesburg, Virginia's Metropolitan Lodge #161 decided in 2006 to renovate their historic 1887 Masonic hall (it served for a time as a school for African American girls), it meant hunting a temporary home in which to meet. After a brief time gathering in the local community center, they approached the brethren of nearby Olive Branch Masonic Lodge #114 of the Grand Lodge of Virginia AF&AM. The result was new friendships and the true bond of Masonic brotherhood.

When renovations to the Metropolitan Lodge #161 began, its members had to think fast of places to meet and hold events. For a long while, the group had no choice but to gather in a small community center or at members' homes. That meant lugging equipment for ritual from place to place, conforming to unfamiliar schedules and other inconveniences.

"We had to always comply with their hours, take time to set up and break down-so we decided not to do that anymore," Ben Jones, of the Metropolitan Lodge #161 Prince Hall Masons, said. "When we were meeting over at the community center, I thought about it, and I said to Mike [Napper, then Worshipful Master of the Prince Hall Lodge], we ought to ask the Olive Branch Masons if we could just use their place! Mike inquired of their Worshipful Master and they said, ‘by all means, please use our lodge.' They were practically shoving keys in our hands."

"We felt like it was the right thing to do," Gary Williams, who was serving as Olive Branch Worshipful Master when approached by Napper, recalled. "When we realized they were completely shut out of their building, and even holding meetings in peoples' homes, we said this doesn't make sense, come use our lodge."

The two branches use the same equipment in ritual, meaning Prince Hall members no longer had to worry about such tedious roadblocks-all they had to do was come and worship. "They'd graciously allow us to use their lodge anytime. We'd just call ahead and they'd say, ‘fine,'" Jones said.

The easy exchange has continued for the past 18 months, with Prince Hall members coming and going as they please from the Olive Branch's 108 Cornwall Street lodge. "This was as far as I know, the first time the lodges have worked together in a fashion like this," Kevin Horman, current Worshipful Master of the Olive Branch Lodge, said, reflecting on sharing space between the two groups. "And it's been great."

Benefits To The Community
Still, though the two lodges certainly have bonded, the time is fast approaching for the Prince Hall brethren to head home to their new space. Jones cited August as a likely move-in date, even though some minor work, "painting, dry wall," would still need to be completed. "When we move back in it won't be all pretty, but at least we'll be in," Jones said. "We'll begin meeting there in August, then hopefully in 2012 when it gets warmer we'll straighten out the front, and the first floor for the computer lab."

It's understandable if that last statement causes the reader pause-a computer lab in a Masonic Lodge? But that's exactly what Jones is aiming for-a place where youth in the community become "producers of electronics, not consumers."

One stipulation of a state grant the Prince Hall lodge received in 2006 is that it must be accessible to the public for a period of time. At first, the members floated a museum of African-American history as a way to comply, but Jones had another idea. "We've got a problem with our young people. We find our youth-black and white-are becoming consumers and not producers. So the first floor of that lodge is going to be a place they learn to build computers," Jones said.

Jones maintains little of what's already been accomplished would have been possible had it not been for the selfless efforts of the Olive Branch Lodge, local dignitaries and ordinary citizens. Sure, extending a helping hand might seem a matter of course for a neighbor in need, but to Jones, it carries greater significance. "It's not about cost or money-it's about what they've done. It's other people that didn't have to help, but they did," Jones said.

Williams agreed, adding that for his lodge, working with the Prince Hall masons has not only been fruitful in terms of forging new relationships, it's also indicative of old prejudices gradually falling away. "We are all members of this very small community, so to cooperate and recognize one another was the right thing to do," he said.

Both lodges agree there's more collaboration on the horizon. "I do think we'll continue to work together. We've made some personal friendships, and I think that will lead to several things we've discussed for us to do together in the future," Williams said.

"It's probably too dramatic to say it's been life uplifting, but [working with the Prince Hall Masons] has allowed us to be more comfortable when we see them about town. We've created that friendship and removed any remoteness," he added.