A photo of alleged Norwegian mass-murderer, Anders Behring Breivik, dressed in Masonic regalia has been widely circulated across the web over the last two days. So, naturally, the usual lineup of anti-Masons, from the Daily Mail to David Icke and Alex Jones, are having a field day naming Breivik as a foot soldier in some worldwide Masonic revolution.
Grand Master Ivar A. Skaar of the Grand Lodge of Norway has posted the following message on the GL website today:

"I am appalled by the terrible crime has been committed in the government quarter and the Utøya," says the Norwegian-order Masonic Grand Master, Ivar A. Skar.

We [express] sorrow and compassion for those who have been affected and their relatives.

It has emerged in the media that the accused has been a member of the Norwegian Order of Freemasons. He is now excluded with immediate effect.

Exclusion is an expression of the acts he is accused of having carried out and the values ​​that appear to have motivated them is completely incompatible with what we stand for that order.

We build our business on Christian and humanist values ​​and want our members to contribute to the promotion of charity, peace and goodness in people.

The police will of course get all the help and information we can help with."

One source says Breivik's membership was in St. Olaus T.D. Tre Søiler No. 8 (the lodge of St. Olaf at the Three Columns) in Oslo. The Grand Lodge of Norway has approximately 20,000 members. It follows the Swedish Rite, which requires its members to declare a belief in Christianity.
From "Frimurerordenen: - Terrorsiktet hadde minimal kontakt med oss
" ("Masonic Order: - Terror accused had minimal contact with us") by Eva-Therese Grøttum: 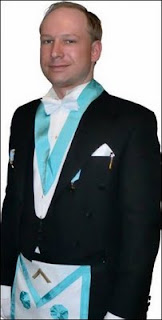 The Associated Press in Norway wrote yesterday that the 32-year-old is a registered member of the Norwegian Masonic Order. The Norwegian Masonic order denies that accused terrorist Anders Behring Breivik (32) has had a membership of importance with in the order. He is now excluded, effective immediately.

[NOTE: I presume the actual Norwegian term "Eksklusjonen "is closer to our word "expelled." If you are stronger in the language than I am, please let me know — my Norwegian consists solely of the ability to say "fjord."]

"As far as we understand he has had minimal contact with the lodge," says Grand Master Ivar A. Skaar to VGNett (news service).

The [Grand Master's edict] states that he is excluded from the order effective immediately.

"Exclusion is an expression of the acts he is accused of having carried out and the values ​​that appear to have motivated them is completely incompatible with what we stand for [in Masonry], according to a press release.

It was Friday that 32-year-old Andres Behring Breivik was arrested and later charged with the heinous terrorist attacks that have shaken the whole world. At least 85 young people are now confirmed dead after he systematically shot and killed everyone he passed at the Labour Youth League summer camp at Utøya. [NOTE: That death toll is up to 93 as of Sunday morning, with another 90 wounded.]

Breivik is also accused of bombing a government building in which at least seven people were killed and nine seriously injured.

Background: Arrested 32-year-old calling himself nationalist
Beyond confirming that there has been a relationship between the Masonic Order and Breivik, GM Skaar does not wish to comment further on the matter at this time. He will not say when the contact occurred, or how active the terrorist accused was in the lodge.

Minimal Contact
Masonic Lodge says they have had minimal contact with Anders Behring Breivik.
"We have discussed the matter on the phone today, he says, referring to the lodge in the press release on the matter.

Meanwhile, CNN is reporting on Breivik's alleged 1,500 page manifesto, in which he describes himself as "Justiciar Knight Commander for Knights Templar Europe and one of several leaders of the National and pan-European Patriotic Resistance Movement." In it, he calls for a European civil war over the next 70 years, the deportation of Muslims from Europe, and the execution of "cultural Marxists."
According to an AP article on the St. Louis Today website, "Lawyer: Norway suspect wanted anti-Muslim crusade":

In the manifesto, Breivik referred to the Knights Templar group. European security officials said Sunday they were aware of increased Internet chatter from individuals claiming they belonged to the group, but were still investigating claims that Breivik, and other far-right individuals, attended a London meeting of its members in 2002.

A 12-minute video clip posted on YouTube with the same title as the manifesto featured symbolic imagery of the Knights Templar and crusader kings as well as slides suggesting Europe is being overrun by Muslims. Police could not confirm that Breivik had posted the video, which also featured photographs of him dressed in a formal military uniform and in a wet suit pointing an assault rifle.