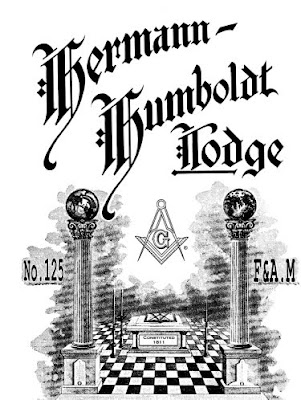 The variety of Freemasonry never ceases to amaze me. I was contacted this evening by W:.B:. Pierre Hans Rausch, the Master of Pennsylvania's Hermann-Humboldt Lodge No. 125. It is one of a rare number of foreign language lodges in the US, performing its rituals in German.


It was at first intended that Concordia Lodge, which was constituted in 1795, should be a German Lodge, but being unable to get the necessary authority to conduct the deliberations in German, it became an English speaking Lodge .It took fifteen years of striving before the Right Worshipful Grand Lodge recognized the benefit of granting a charter to a Lodge permitting the use of the German language in its proceedings.

On December 12, 1810 a petition was drawn up by ten members of Concordia Lodge, No. 67, asking permission to withdraw and present a petition to the Grand Lodge in the endeavor to procure a charter to hold a Lodge in the German tongue. Their petition was granted by Concordia Lodge on December 14, 1810. . . The contitution of Hermanns Lodge NO. 125 and the installation of its officers took place at Grand Lodge on Friday ,January 25, 1811.

From 1873 until 2004 the Lodge held its meetings in the Masonic Temple at One North Broad Street In Philadelphia, Pennsylvania. One of its members ,Brother Anthony Bournonville, in 1852 was unanimously elected Grand Master of the Grand Lodge of Pennsylvania- the first ethnic German to occupy this prestigious office!

Hermann, now Hermann-Humboldt Lodge ( merged in 2002 ) has always cherished and honored the sacred heritage of its founders: furtherance of Masonic principles; preservation of the German language in ritualistic work; active Interest in all German endeavors and undertakings and fraternal benevolence! The proceedings continue to be conducted in German and the German language along with English is still spoken at all of its festivities and meetings. It can be justly said that Hermann-Humboldt Lodge ranks among the most important German institutions of this country and earnestly endeavors to carry out the fundamental principles of Freemasonry and make them universally beneficial!

The lodge will celebrate its 200th anniversary on February 12th, 2011 at the Grand Lodge of Pennsylvania.

Bro. Brian Fegely from Philadelphia passed along the message that Hermann Lodge and Humboldt Lodge were merged from two Philadelphia city lodges which worked Pennsylvania ritual in the German language. He also says there is a lodge near Reading that uses Pennsylvania Dutch, a variant of Swabian dialect.

Thanks Brian.
Posted by Christopher Hodapp at Sunday, September 05, 2010