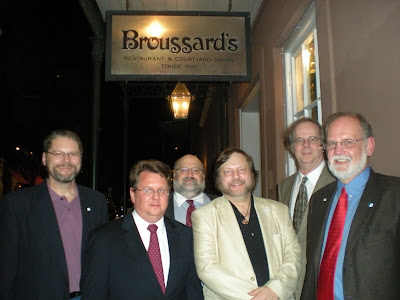 Board of Directors Dinner at Broussard's in New Orleans on Friday night. Left to right, Randy Williams;
Mark Tabbert; Nathan Brindle; Chris Hodapp; Mike Poll; and Bo Cline.
It's been an amazing couple of days in New Orleans for the Masonic Society semiannual meeting! A great lineup of speakers Friday and Saturday, and an incredible day at Etoile Polaire Lodge No. 1. Food was great, the Royal Sonesta Hotel on Bourbon St is tremendous.

Randy Williams delivered an excellent presentation on creating a solid Masonic research paper, which will appear in the next issue of the Journal of the Masonic Society.

Mark Tabbert gave us updated information on the George Washington Masonic Memorial's digitizing program. Mark''s role will expanding, and he is getting trained to teach others how to load information into the database. That means grand lodge museums, individual lodges, and even private Masonic collections can be photographed, catalogued, and become part of the searchable, online database.

Marc Conrad's talk on early Louisiana Freemasonry was almost overwhelming. There is enough material for Marc to spend an entire weekend on all by himself. Louisiana's Masonic history, like everything else here, is complex and reflects the history of New Orleans itself, with French, Spanish and many other influences.

Andrew Hammer and the brethren of Alexandria Washington Lodge No. 23 in Alexandria, Virginia have made exciting philosophical and operational changes at their lodge, taking Traditional Observance lodge aspects and combing them with their own personalization. His paper was a preview for his new book, Observing The Craft, which is a call for a reverent and philosophically serious approach to the practice of Freemasonry. The book is due October 11th.

Bo Cline, PGM of Alaska, and Bill Mollere, SGIG for the Scottish Rite Orient of Louisiana, hosted an open forum on the subject of Masonic Unity and the sometime lack of it. Interesting observations came out of the discussion about spreading ourselves too thin in terms of our time and participation, competition between Masonic charities (and the misunderstanding of the concept of Masonic "Charity" that has been translated into institutionalized giving), along with our saints and martyrs who give their whole lives o the fraternity and expect everyone else to do the same. We didn't solve the world's problems, but it brought up topics little explored by our organizations.

Yasha Beresiner gave a great presentation on developments in English Freemasonry during the last hundred years, in case you think English Freemasonry has't changed much. His paper will also be in the next issue of the Journal. It was good to have Yasha here—he was in New Orleans attending a playing card convention (!) across town, and split his time between that event and ours.

Saturday afternoon was spent at Etoile Polaire (Polar Star) Lodge No. 1, a few blocks from the hotel. As was described by Marc Conrad in Issue 9 of the Journal, Etoile Polaire is one of just ten lodges in Louisiana that are allowed to work the French Rite version of Craft degrees, which are dramatically different from the Preston Webb workings most American Masons are familiar with. The brethren initiated a young man as an EA, and it was a fascinating ceremony to see. This is not just a few differences in words, it is a far more involved journey of trials and achievements for the candidate. If you missed this opportunity to see it, at some time in your Masonic life, you should witness this degree work that developed very differently from our English-derived versions.

While at Etoile Polaire, the Louisiana Lodge of Research was opened, and Dr. Michael Carpenter presented a detailed history of the French Rite in Louisiana Masonic history. The twists and turns of the development of these rituals ae still being discovered today, as new documents are being found.

Food was great, but come on, this is New Orleans. The gumbo at Etoile Polaire Lodge, with more shrimp than I have ever seen in one pot, was outstanding. The board of directors had a wonderful dinner at Broussard's, and the banquet meal at the Royal Sonesta hotel was also excellent.

I'd say it was damn fine time in New Orleans, and I extend my personal thanks to Mike Poll and Nathan Brindle who did the heavy lifting for this. Mike slugged everything out with the hotel, while Nathan handled the million secretarial things that happen behind the scenes that no one ever things about. Also to Marc Conrad and the rest of the Louisiana brethren who worked so hard to present a great series of programs locally. Kudos and huzzahs go to all of the presenters. And especially to everyone who turned out to make it a great event. And I really enjoyed the opportunity to spend a little time in person with Randy Williams at last. Randy works very hard on the Journal, along with making regular contributions of articles, so it was good to actually talk in a form besides email for a change.

Many, many thanks again to all. We have decided on the location for next year's semi-annual meeting. We are just waiting on an official letter from our hosts this coming week to confirm, and we will announce the date and location in the coming issue of the Journal.
Posted by Christopher Hodapp at Sunday, September 26, 2010