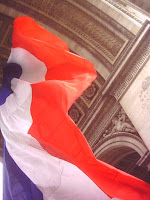 Word has come from France today that the Grand Orient of France (GOF), that country's largest Masonic obedience with approximately 50,000 members, has officially voted at its annual assembly to accept female members and become a co-Masonic organization. In April, the GO's then Grand Master Pierre Lambicchi told L'Express Magazine, "We are not statutorily a mixed obedience." That has now officially changed. Lambicchi was succeeded at this meeting by the new Grand Master, Guy Arcizet.

Two years ago, six women were initiated into Grand Orient lodges largely as a test of the rules. In addition, an existing Mason within the Grand Orient underwent transsexual surgery and became a female. "Olivia Chaumont" was recognized as a sister within the Grand Orient in January 2010. This was considered a drastic innovation at that time, and previously the GO directed brothers who became women to existing mixed or feminine Masonic orders.

France has several such organizations, and 17% of that country's Masons are female. They do not have the Order of the Eastern Star in France, while female Masons have existed there since at least the 1780s, and possibly as early as the 1740s.

On April 8, 2010, the GO's Supreme Court of Masonic Justice decided that their lodges were free to initiate women without violating the General Regulations of the obedience. Nevertheless, 56% of the assembled members voted at their 2009 convention last September to remain a male-only institution. Female Masons have been allowed to visit GO lodges since 1974. Apparently, the majority opinion has changed this year.

This now leaves the Grande Loge de France (GLdF) and the Grande Loge Nationale Française (GLNF) as the largest male only Masonic obediences in that country. The GLNF in particular has been steadily increasing in popularity, but both will undoubtedly now see defectors from the GOF over the new policy. And the feminine grand lodges in France will undoubtedly see this as an encroachment on their staked out territory by the largest obedience in the country.

The Grand Orient de France does not require a belief in a Supreme Being, nor are lodges required to have a Volume of Sacred Law on its altars. The GO frequently issues public policy opinions, attacks perceived public influence by organized religious groups (especially the Catholic church), and often meets as an official group with French government officials. They recently joined with the equally irregular Grand Orient of Belgium and female Masonic groups to open an office in Brussels to influence government policies of the European Union. Their activities are completely in opposition to mainstream Freemasonry's longstanding rules and practices.

Here are a few more items I found today:

The Grand Orient de France met this year in Vichy to commemorate the 70th anniversary of its dissolution in that city by the government of Marshal Philippe Petain during World War II.

The decision to admit female Masons in the GOF is up to each individual lodge's choice, which is a common theme in the GOF. This also applies to the choice of whether to include an open VSL in a lodge.

There are at least ten Masonic allegiances of varying importance in France. The GOF has just under 50,000 members. The GLNF has about 38,000 members, and the Grand Lodge of France (GLF), has 28,000. Le Droit Humain (DH) is a Co-Masonic obedience which claims 15,000 members, and the Grande Loge Feminine de France (GLFF), represents some 14,000 women. It should be noted by all of us in the US that every one of these grand lodges in France have steadily increased their membership over the last six years, which is the last time I checked these figures.
Posted by Christopher Hodapp at Thursday, September 02, 2010