Airlift Lodge No. 838 in Wiesbaden

Brother Clarence "Clay" Anderson on the MasonicLight Yahoo list frequently posts articles he has translated from the European press. Below is a story that appeared in Germany yesterday on the Wiesbadener Tagblatt website about an interesting lodge at work in Germany: Luftbruecke Lodge No. 838 ("Airlift Lodge") in Wiesbaden.

The "Secret" Legacy of the Airlift 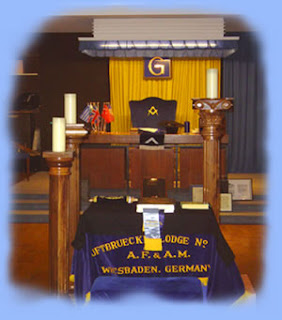 Goethe was one, so was Mozart. Even the first U.S. President, George Washington, was a Freemason. Up to today, the mystical gentlemen pull the strings behind closed doors and direct world events. Or do they?

Thanks to novelists such as Dan Brown, the wildest conspiracy theories have sprung up around the Masonic lodges. Matthias Hartmann has already heard it all, and can laugh about it. He is an honorary member of the English speaking "Luftbruecke [Airlift] Lodge No. 838" in Wiesbaden. "Of course, in reality Freemasonry has nothing conspiratorial. It is a worldwide ethical fraternity of men. Although one must add that there are now a number of lodges of women."

As for the Freemasons, they work on themselves and on becoming better human beings, said Hartmann. "We strive for ideals such as tolerance, freedom and humanity. People come together from different social and cultural backgrounds, to exchange experiences with each other and to discuss the greater and smaller problems in the world. There are also special rituals, in which existential questions of life and death should be experienced. Freemasonry is for us an emotional space," says Hartmann.

All this is done according to established rules in the lodge's Freemason Temple, which is usually not open to the public. The secrecy of the organization has certainly contributed to its air of mystery -- even in Wiesbaden.

The local Luftbruecke Lodge was founded in 1957 by American Freemasons, who participated as pilots and soldiers of the U.S. Air Force during the Berlin Airlift (1948/49). Today the lodge includes more than 200 members worldwide, of whom 30 live in Wiesbaden and meet regularly. Among them there are no longer just Americans and Germans, but also Turks, Frenchmen, British, and many other nationalities. "The more mixed a lodge is, the closer we can come to our ideals," says Hartmann.

Any adult can apply for membership in a Masonic lodge. He will begin as an "Apprentice," in time become a "Fellow," and finally be raised to a "Master." The terms originate, not coincidentally, from the working craftsmen: the tradition of the Freemasons dates back to the stonemasons of the 15th and 16th century, who organized themselves into brotherhoods.

Depending on their status, the Freemasons are allowed to participate in various rituals. For example, while the rituals of the first degree are open to the Apprentices, the rituals of the third degree are reserved for
Masters. "It's like in school. One does not send a first grader to be taught in a fourth grade class, because he lacks the skills for it. Once a Mason has met certain conditions, he can attain a higher degree," explained
Hartmann.

The "Master in the Chair" is what the Masons call the chairman of their group. He is elected once a year by the Wiesbaden Luftbruecke Lodge, as happened last Wednesday. The future head of the Lodge will be the Australian Douglas Gardner. On Sunday, September 5, he is being installed into his office with a ceremony. Following the Anglo-Saxon Masonic tradition, Airlift Lodge is opening its Temple to the public.

Luftbruecke Lodge is chartered by the American Canadian Grand Lodge AF&AM, which is a part of the United Grand Lodges of Germany. The ACGL and the UGLofG have a fascinating history. Read more here.
Posted by Christopher Hodapp at Wednesday, September 08, 2010