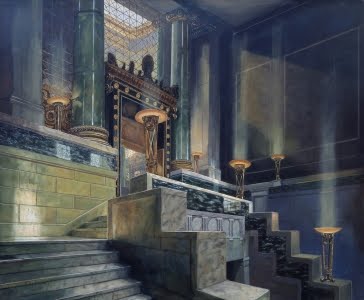 Artist Peter Waddell's 21 painting exhibition, The Initiated Eye, continues at the Scottish Rite Northern Masonic Jurisdiction's National Heritage Museum in Lexington, Massachusetts. The exhibit runs through January 9th, 2011. The paintings were commissioned by the Grand Lodge of the District of Columbia, and have traveled the country. I was lucky enough to see them in San Francisco two years ago.

The paintings are based on the history and architecture of Washington, D.C., and the role that Freemasons had in the design and construction of the city. They feature famous Masons and Masonic landmarks in the nation's capitol. In Lexington, they are accompanied by forty artifacts that will compliment them and help to illustrate the story of Freemasons in Washington D.C.

Founded by the Scottish Rite Northern Jurisdiction as a gift to the nation for the bicentennial of the United States in 1976, the National Heritage Museum demystifies the rituals, symbols, meaning and history of Freemasonry. It has one of the finest Masonic collections in the United States, with more than 16,000 Masonic and Americana objects, demonstrating the rich diversity of American life across four centuries, with as many as 18 changing exhibitions in six versatile galleries.
Posted by Christopher Hodapp at Thursday, July 08, 2010