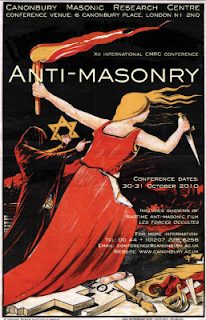 London's Canonbury Masonic Research Centre is pleased to announce that tickets for its twelfth annual conference, which this year is on the theme of ‘Anti-Masonry’, are now available.

The film Les Forces Occultes was made in 1943 by two "former Masons", Jean Marques-Riviere and Jean Mamy. Both men were Vichey supporters and collaborated with the Nazis to produce anti-Semitic and anti-Masonic propaganda. When the war ended, Mamy was sentenced to death for his work with the Gestapo, and was shot in March 1949. Marques-Riviere escaped prosecution, and was condemned to death in absentia. He died in 2000.

The following lectures are scheduled to be presented at the conference:

• Anti-masonry among the Ottomans and in contemporary Turkey
Professor Thierry Zarcone, CNRS, Paris

• 'The Devil's sons': one century of anti-masonry in the Arab world
Stephan Schmid, American University of Beirut