'The Compasses and the Cross' by Stephen Dafoe 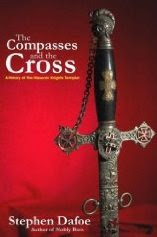 My copy of Stephen Dafoe's latest book, The Compasses and the Cross arrived earlier this week (what gives with Lewis Masonic and no real distribution with Amazon? That's just plain business suicide in the publishing world).

Stephen and his editor were kind enough to ask me to write the Foreword for the book, and what I said there before seeing the beautiful finished book with its great illustrations and photos (including pieces from the collection of Indianapolis friend and Sir Knight Carson Smith) is truer now in its final form:

The trouble with mythmaking within the windowless temples and tyled meetings of a fraternal organization that cherishes its reputation of secrecy is that, occasionally, outsiders believe the myths, too. Thus it has been with the tall Templar tales of Freemasonry. The result has been a literary avalanche of speculative stuff and nonsense that can be traced back to a few very specific episodes of wishful thinking or deliberate fable weaving of our Masonic forefathers. What Stephen has done is to trace the legends of Masonic Templarism back to their sources and shine the light of truth on them, once and for all.

For a fraternal organization like Freemasonry that prides itself on its inclusion of men from all economic and religious walks of life, to many, having an appendant organization that requires a belief in Trinitarian Christianity and makes “Christian soldiers,” seems like an anachronism. The Compasses and the Cross explores and explains where those notions came from.

But it is important to understand that this book is not some blunt instrument of debunkery. It is a thoroughly researched history of the development of the Knights Templar within Freemasonry, and the very different paths it took in continental Europe, England, Scotland, Canada and the United States – and make no mistake, Masonic Templarism is very different in all of those places. Hence, my own ersatz Civil War uniform and anachronistic chapeau that is common across the U.S., but unknown elsewhere. . .

[The Compasses and the Cross] is destined to be a unique resource for those studying the history of Freemasonry and its labyrinthine degrees and orders. There is no other volume I know of that investigates this important phase of Masonic history in such careful detail. Stephen has not set out to burst bubbles, but to understand where they came from, and how they became what we see in commanderies and preceptories around the world today.

So much in Freemasonry is explained to its members as “the way we’ve always done it.” That clearly is not so, and that’s no way to answer inquisitive students of the fraternity. For those who want to know why and how and when the Knights Templar rode on their steeds into Masonic history, I urge you to read on.