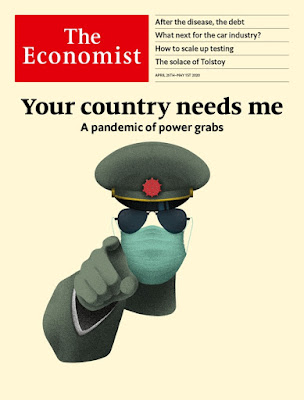 American Masons don't know how good we have it.

An article in the Britain section of April 25th edition of The Economist magazine told a human interest story about the Masons in Lincolnshire, speaking with Brother Matt Felgate of the Provincial Grand Lodge, and UGLE's CEO David Staples. The story is about what local lodges and Masons are doing under the COVID-19 Wuhan Virus shutdown to help the community, and the brethren there are truly finding some excellent and innovative ways to assist their fellow citizens during Britain's nationwide shut-down.

But before they talked nice about anything the fraternity was doing, the unnamed reporter had to start right in with the swipes. The article was entitled 'Out of the shadows:The freemasons want to be known for hand wash, not handshakes' with the additional cynical addition, "Covid-19 offers a chance for some good publicity."

Not "a chance to help," or "a chance to do good," but just the snark about publicity. And British reporters are downright obsessed with our 'secret handshakes.' It keeps them up nights worrying about it.

The opening paragraph has to lead off with the usual claptrap about sinister allegations:

The freemasons, a centuries-old network of fraternal lodges, have long provided fodder for thriller writers and folk with overactive imaginations.

Note the stylistic difference in Britain that they won't deign to capitalize Freemasonry or Masons when the terms appear in print. All the better to diminish any sense of respect for the fraternity, despite the fact that all of UGLE's written material capitalizes them.

Suggestions of conspiracy range from the outlandish to the banal. Steve White, a former chairman of the Police Federation, a cops’ union, claimed they blocked reforms to the service. Masons roll their eyes at such claims. “There is ‘The Da Vinci Code’ and the keyboard warriors going crazy,” sighs Matt Felgate, a freemason from Lincolnshire’s Provincial Grand Lodge. “But much to my disappointment, it’s mainly about making yourself a better person.”

What a reference to Steve White's absurd and baseless 2017 yawpings about the Police Federation is doing in this human interest article boggles the mind. An angry ex-union leader who was about to be voted out of office decided his failures weren't his fault — no, it were those bloody Freemason cops. Read his pathetic story HERE. And then ask why The Economist stuck it in the opening paragraph of an article about Masonic charity.

The article finally gets around to explaining that, outside of the lodge, Brother Felgate runs a gin distillery, and he's converted his production line to manufacture hand sanitizer that's been in short supply. Brethren in Scunthorpe have made more than a thousand masks for caregivers. Other area lodges have purchased thousands of masks from China to donate, or are loaning parking facilities to nurses.

For once, being able to call in favours from a network of contacts seems positively altruistic...

Another swipe. "Calling in favors" is one of those baseless allegations that the press has convinced the public we engage in to get ahead of the common rabble. "Sod the proles, Brothers, do me a favor because we're Masons! Shake my hand."


In Belfast masons managed to find some 3,000 packs of loo roll. “I got together with someone I knew who owned a toilet-roll factory,” says Leslie Weir of the local lodge. “It’s just nice to be seen. We may have some secrets but it’s not a secret society.”


Masons emphasise that such charitable efforts are nothing new. Indeed, they claim their brotherhood is the second-biggest institutional donor in Britain.

It's not a "claim," it's a fact. But the press can't let that go without seeking the real motive:


As well as being a good in itself, such public acts of philanthropy help to counter the brotherhood’s reputation for secrecy.

The whole article is hidden behind a paywall, so I won't quote all of it here. In fact, they have a huge application form to apply for a license to reuse their content, so I suspect I'll be scolded even for just these excerpts. But you get the gist. 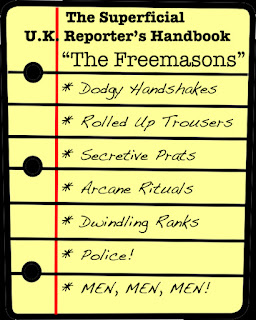 UGLE's David Staples is fighting an uphill battle in trying to counter almost 40 years of deliberately insulting and false coverage of Freemasonry in Britain.

I suppose this article is pretty benign, in comparison to the usual spate of downright insulting, accusatory and mocking articles that normally dominate the British press whenever Freemasonry gets mentioned. In many ways, it's a downright victory that it set aside the majority of the tropes that have filled papers in England since the 1980s. There wasn't a single mention of rolled up trousers, arcane rituals, or a reference to those handshakes as being "dodgy."

I guess that counts as a win.

But a hit piece wrapped in a soft, velvety glove is still a hit piece. And The Economist should be ashamed of itself.
Posted by Christopher Hodapp at Saturday, April 25, 2020