Well, it seems that us terrible Freemasons are out to force an anti-Christian Union on Europe, the poor old thing.

News that the European Union could soon open an investigation into tax breaks that the Italian Church enjoys in the property market sparked a fierce political debate in Italy Tuesday.

"Hopefully our pro-European country will dispense with these privileges," he added. The Green party forms part of the radical wing of the current ruling coalition.

But the Christian Democrat UDC party dismissed the Brussels initiative, suggesting it was the product of "radical Freemason" circles.

There's nothing like a panicked politician when cornered. But he had to reach awfully deep to find a Masonic bogeyman. And here I thought our numbers were shrinking and that Freemasonry wasn't relevant to anybody anymore. Yet here we are snatching the Vatican's tax free status from them? Incredible!

Has anyone but me noticed a general uptick in anti-Masonic messages out of Europe? Or is it just that the web makes them easier to run across these days... 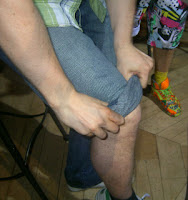 But of course, nothing beats the U.K. press' standard gigglesome anti-Masonic swipe. It's in a good 85% of all news articles that come out in the U.K. that mention Freemasons. As in this otherwise benign description of Norwich's "Heritage Open Days," during which Norwichers (Norwicheans? Norwichii?) are allowed into buildings normally closed to the public:

Find out why you don't need to roll up your trouser legs to get into Norwich's Masonic Hall on St Giles Street. Free tours of the intriguing 17th century hall run all day on Saturday and Sunday.

They just can't stop themselves from that hilarious "rolled up trouser leg" gag.

Yuk-yuk-yuk. It's a knee-slapper.
Posted by Christopher Hodapp at Tuesday, August 28, 2007