"Freemasonry, notwithstanding, has still survived. " 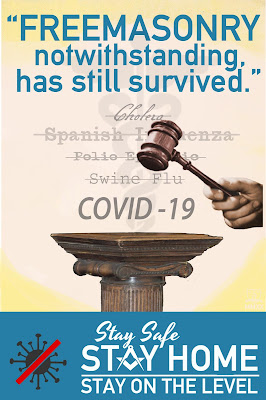 RW Michael Halleran, Past Grand Master of Kansas and former editor of the Journal of the Masonic Society, just passed along this artwork for a Masonic/COVID graphic.

"Wanted to do something to help," Mike wrote. "Enclosed is a 6x9 jpg poster I did up today that any lodge or grand lodge can freely use...if it helps, please post it. The poster is suitable for social media posting as is, and can be printed (if that is still a thing) at a 1:1 ratio at 6 inches by 9 inches."

The quote, "Freemasonry, notwithstanding, has still survived," is taken from the explanation of Geometry that appears just before the Charge to the Fellow Craft that is fairly commonly heard throughout North American Masonic rituals in most jurisdictions. William Preston printed it in his Illustrations in 1779, and it quickly began to encircle the globe as Masons traveled on English ships to distant colonies.*

That passage is one of my favorites in all of Masonic ritual, and was part of the first extended lecture I ever learned in my whirlwind trip to the Worshipful Master's chair.

"The lapse of time, the ruthless hand of ignorance, and the devastations of war have laid waste and destroyed many valuable monuments of antiquity, on which the utmost exertions of human genius have been employed. Even the Temple of Solomon, so spacious and magnificent, and constructed by so many celebrated artists, escaped not the ravages of barbarous force.

Freemasonry, notwithstanding, has still survived.

After the American Revolution. the Antients' lodges spread across the new nation and quickly supplanted the Moderns, who were largely seen as Loyalists. By then, Preston's lectures were already being incorporated into American lodge rituals. In 1797, Thomas Smith Webb's Freemason’s Monitor or Illustrations of Masonry, was published and was quickly adopted across America as the closest thing to an 'official ritual' most grand lodges would have for another century. Webb included the lecture verbatim.

But Freemasonry, notwithstanding, has still survived.

By the way, here's one for my home jurisdiction in Indiana.

* (Yes, I've updated this post to reflect that the phrase did NOT originate with Dermott's Ahiman Rezon in the 1750s. Serves me right for not double checking my sources. It doesn't appear in an edition of Ahiman Rezon until Stickle's greatly expanded edition in the 1860s.)