More on the Norway Killer's Masonic and Templar Connections 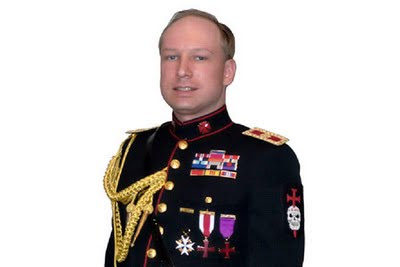 Meanwhile, the AP featured an article hunting the purported London-based "Knights Templar" that Brievik claimed to be affiliated with that was mounting a modern-day Crusade against Europe's Muslim population. Far-right blogger Paul Ray, who was once a part of the anti-Islamic English Defense League, says the "The Ancient Order of the Templar Knights" was indeed formed in 2002, but was more of a pipe dream than a real organized, structured group. Ray is known online as "Richard" on the blog "Lionheart."

The EDL's motto is, incidentally, "In Hoc Signo Vinces".

(Interestingly, Ray says he fled England two years ago and moved to Malta after his arrest at home for inciting racial hatred. What is it with Knights and Malta?)

Of course, none of these pesky details has put a sock in the squeakhole of anti-Masons like Alex Jones, who used the Norway tragedy and Breivik's Masonic membership as an entrée to spout more falsehoods, errors and lies in a five minute "interview" on Monday than most folks manage in a whole year. In it he claims the Bohemian Grove is a Masonic black magic gathering; that the Illuminati was founded inside of Masonic lodges; Albert Pike, "Supreme Commander of all global Masonry" predicted three world wars to set up a universal government in worship of the Masonic God, Lucifer... And that's just in his first 30 seconds. (How does this self-aggrandizing parade float keep getting attention from supposedly reputable media outlets?)

And never mind that the opening to the interview simply lumps the Knights Templar of Brievik's imagination with the the Masonic Templars. It's much simpler than doing actual research. In truth, Breivik never advanced beyond the 3rd degree of Master Mason, and was not a Masonic Knight Templar (which is a part of the Grand Lodge of Norway's 10-degree system, and not divided into a separate Rite as it is in most other countries).
at 7/28/2011

Email ThisBlogThis!Share to TwitterShare to FacebookShare to Pinterest
Labels: Anti-Masonry