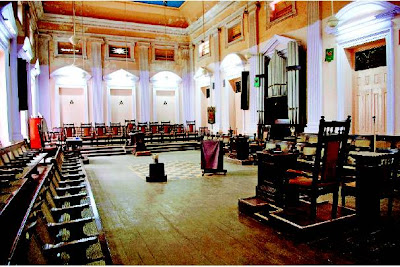 Freemasons' Hall in Mumbai (formerly Bombay), India is featured in today's Mumbai Mirror, as part of the article STEP INTO THE CITYS POCKETS: Five little-known hideaways where the relentless scramble of Mumbai suddenly comes to pause

The history of Freemasonry in India is a fascinating story. Just 12 years after the formation of the Grand Lodge of England, a petition was sent by English brethren in India to form a Provincial Grand Lodge in Calcutta, which was granted in 1728. The first Indian Mason was Omdat-ul-Omrah, Nawab Carnatic initiated in 1775.

The Grand Lodges of England, Scotland and Ireland all chartered lodges in India over the next two centuries. When the British colonial period came to an end, an independent Grand Lodge of India AF&AM was formed by 145 of the 277 lodges at work in the country, by mutual agreement with all of the GLs. The Grand Lodge of India was officially constituted on the 24th November 1961 in the Ashoka Hotel, New Delhi.
Written by Christopher Hodapp at 5/24/2010