View Larger Map
The oil rig accident in the Gulf of Mexico has brought the tiny sliver of silt known as Freemason Island into the news. It is located about 85 miles east of New Orleans in Chandeleur Sound, and after several hurricanes, there is almost nothing left of it above the surface of the water. I got curious about the name of the island, but could find almost nothing about it on the web, apart from its status as a favorite location for local fishermen, and its dubious distinction of being where the oil slick was sighted on its way to the coast.

Brother Marc Conrad helped fill in information about the island on the Masonic Society forum today:

"This was one of the first Federally created bird reserves created under the auspices of the Audubon Society. It was created in 1904 by President and Freemason Teddy Roosevelt. There were originally three islands covering 10,000 acres where various birds would roost and mate. Famous birds roosting on Free Mason Islands were the Pelican (Louisiana's Masonic Scottish Rite Rose Croix State bird), the Red Egret and the Louisiana Egret. 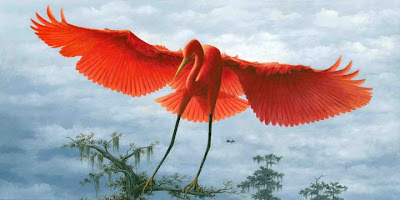 The Red Egret is symbolic of the phoenix as seen by an artists depiction of the same above. The Pelican has obvious connections to the Scottish Rite's Rose Croix degree." 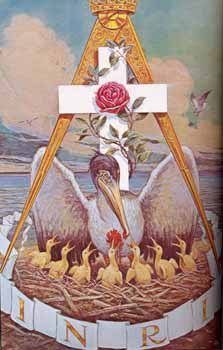