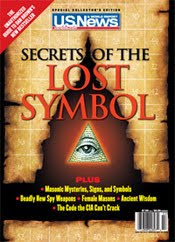 The special publication U.S. News & World Report: Secrets of the Lost Symbol features a lengthy excerpt of chapters from Solomon's Builders: Freemasons, Founding Fathers and the Secrets of Washington D.C.

DISCOVER THE SECRETS OF THE LOST SYMBOL

In The Lost Symbol, Dan Brown's blockbuster sequel to The Da Vinci Code, world-famous symbologist Robert Langdon once again finds himself in the midst of murder and mayhem—this time in the heart of the nation's capital in Washington, D.C.

This unauthorized guide to the novel, by the editors of the best-selling Secrets of the Da Vinci Code, unravels all the history and mysteries of the novel from the codes, secrets and unseen truths to the mystical rituals and hidden past of the Masons, the secret society whose clandestine world is at the heart of Brown's lurid tale.

Available in bookstores now, or online.
Written by Christopher Hodapp at 3/19/2010