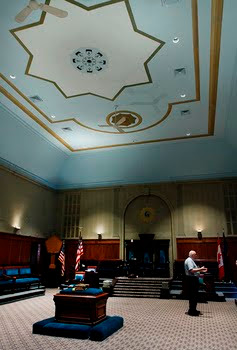 I'm on the road this weekend, but check out the article in today's Nashua Telegraph on Nashua, New Hampshire's Masons, and Grand Master Wayne Libby:

The men who belong are Masons, a cohesive fraternity of individuals who pride themselves on strength of character, personal and family values, loyal friendships, and the importance of charitable and philanthropic endeavors.

There’s tons to know about Masonry, and thanks to a fairly new endeavor begun by state grand master C. Wayne Libby, the ideal opportunity will come up next Saturday, when the Nashua lodge and many others throughout the state will throw open their doors to the public. . .

Libby, a New Hampshire native and longtime Nashua resident who rose to state grand master from his leadership of Rising Sun Lodge, said the Masons are a charitable, philanthropic fraternity that’s sometimes mischaracterized as a religious, or secret, society that shuns outsiders.

“We’re everybody,” he said. “We’re a microcosm of society. We’re a self-governed, disciplined organization that’s based on respect, very strong principles and freedom.”