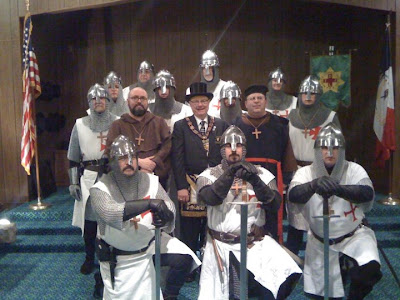 (Photo by John Bridegroom of Levant Preceptory after conferring the Order of the Temple on March 20th at Highland Commandery in Hammond, Indiana)
Levant Preceptory is a group of Indiana Knights Templar from various commanderies that confers the Order of the Temple in period Knight Templar costumes including chainmail armor, broadswords, and helmets. While we are organized under the charter of Indianapolis' Raper Commandery No. 1, Sir Knights cooperate from commanderies all over Indiana to take part in this unique presentation of the Masonic Knight Templar orders. 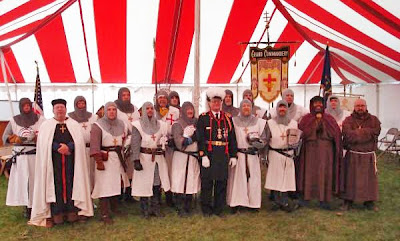 (Levant Preceptory after conferring the Order of the Temple at the Indiana Masonic Home in Franklin, Indiana)
Levant Preceptory will be traveling to Red Hills State Park Park near Sumner, IL on June 12 for an outdoor conferral of the Order of the Temple. Sumner is in southeastern Illinois approximately 20 miles west of Vincennes, IN. SK Bill Hussey is the point man for the group in Illinois and he informs us that they have commitments to attend from commanderies in Indiana, Illinois, Kentucky, and possibly Missouri. The Right Eminent Grand Commander of Illinois, Sir Knight Joseph W. Lucas, will be in attendance, as will members of the Grand Commandery of Indiana.