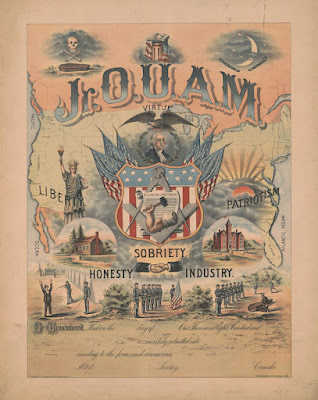 by Christopher HodappA lady with the last name of Tobias sent me an email early this morning asking for help identifying what she thought was a Masonic sword that belonged to her grandfather. The engraved name on the sword blade was 'U.S. Grant Tobias.' It was a very typical fraternal group sword from Ward or Ames or Pettibone, or one of the several other companies making these since the 1860s. And they made thousands of them.
While attempting to save her message after reading it on my phone, I accidentally deleted her note and the photos. And I don't mean 'rescue-it-from-your-trash-folder' deleted, but double deleted it even from that folder. I've tried all the restoration tricks I know of, to no avail.
So, if you are Ms. Tobias, the answer is no, the sword in your photos is not Masonic. Unfortunately, I only glanced at the photos for a few seconds before I stupidly deleted them. But I did look at them long enough to identify the symbols.
The scabbard is indeed from the American Legion veterans association. But the sword itself has the very Masonic-looking square and compass with an upraised arm holding a hammer in the center that denotes the Junior Order of United American Mechanics on its counter-guard. It's easy to get it confused with the Masonic symbol, but the two groups are not related.

It's odd that the JrO. U.A.M. sword would have an American Legion scabbard - perhaps he belonged to the two groups simultaneously. Or he may have lost or damaged the proper one for the JrO. U.A.M. and just substituted the American Legion scabbard so it would be protected.
Both organizations are still in operation today.
In any case, the best source of information for identifying these antique swords is John D. Hamilton's indispensable book, The American Fraternal Sword: An Illustrated Reference Guide. Highly recommended, especially for fraternal museums, collectors and antique dealers.
Posted by Christopher Hodapp at Monday, May 09, 2022