News of The Masonic Society; TMS Journal Issue 56 On Its Way 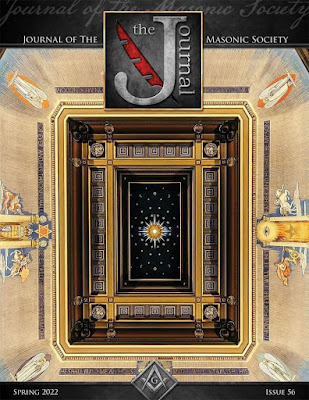 by Christopher HodappIssue 56 of the Journal of The Masonic Society is about to start hitting subscriber mailboxes. Our Editor Michael Poll, Art Director John Bridegroom, and the whole team continue to do amazing work highlighting Masonic education and research.
The cover features a stunning view of the ceiling in the main lodge room of the United Grand Lodge of England on Great Queen Street, London.
Here is the line-up of the papers in this issue:

• Gratitude in Masonic Life by C.R. Dunning, Jr.
• Nine: Masonic Fan Fiction by M. Christopher Lee
• Masonic Education in the Time of Pandemic: The Rubicon Masonic Society’s Experience by Dan Kemble
• The Feast of the Paschal Lamb: A Memorial Service by Michael Moran, FMS and Samuel Kyburz
• Memorials of Tom Jackson and Ralph McNeal
• Highlights of this year's Masonic Week

While I'm on the subject, my belated public congratulations to WB Oscar Alleyne who was elected in February at Masonic Week 2022 as the new President of the Masonic Society. 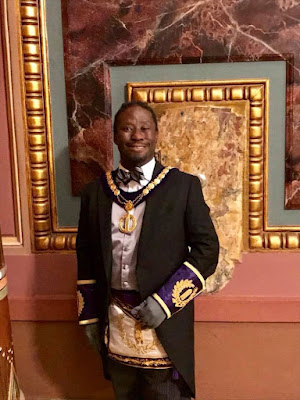 (The photo is admittedly a couple of years old, but it's one of my favorites taken of Oscar at the Grand Lodge of New York.)
The annual Masonic Week dinner meeting of the Masonic Society actually had record attendance this year. Some 112 Brethren assembled for food, fellowship, elections and an outstanding speaker. Chris Ruli, longtime Grand Historian and Librarian of the Grand Lodge of the District of Columbia, presented “Masonic Myth of Our Nation’s Capital,” a discussion dispelling some of the more groundless (and frequently silly) stories told about the Masonic influences on the design and building of Washington, D.C.
In addition to Oscar's election as President, Gregg Knott was elected as First Vice President, and Mark Robbins as Second Vice President. Newly elected Board members are Kevin Wardally, Grand Treasurer of the MW Prince Hall Grand Lodge of New York, and Mason Russell, Grand Treasurer of the Grand Lodge of Massachusetts.
And a huge round of thanks to our outgoing President Jay Hochberg who served us during a couple of the most disruptive years in modern world history with leadership and distinction. If you have never discovered his 'Magpie Mason' blog (hard to believe, since he's been at this as long as I have), check it out here.

The Masonic Society was established in 2008 as a Masonic research organization and publishes its Journal quarterly. If you are a Master Mason and not a member or subscriber, you should be!

"We are brothers who have a deep and abiding desire to seek knowledge, explore history, discover symbolism, debate philosophies, and in short, who are at the forefront of charting a path for the future of Freemasonry. The goal of The Masonic Society is not just to look backward at the history of Freemasonry, but to foster the intellectual, spiritual and social growth of the modern Masonic fraternity.

"To that end, The Masonic Society extends the hand of assistance and cooperation to individual research lodges throughout the Masonic world. It is the desire of The Masonic Society to cooperate with these lodges, to give their members the regular opportunity to publish their papers for an international audience, and to publicize their activities..."

Membership is US$45 per year for US addresses, US$49 per year for Canadian addresses, and US$67 per year outside of the U.S. & Canada. Non-Masons, libraries and others may subscribe to the magazine at the same rate.