by Christopher HodappThe newly resurrected Masonic Book Club (MBC) has announced its upcoming second volume: a new edition of Samuel Pritchard's 1730 Masonic exposure, Masonry Dissected, featuring commentary by the late Harry Carr, and revised and updated by Arturo De Hoyos and S. Brent Morris. The pre-order window for Masonry Dissected will be announced in late Fall 2021 or early Winter 2022.
Pritchard's book included the first known publication of the details of the Master Mason degree, which had only been incorporated into the premiere Grand Lodge of England's ritual in 1726, just nine years after the 1717 formation of their grand lodge.
During the years before 1726, English ritual had contained only the Entered Apprentice and Fellow Craft degrees. While Pritchard's book was doubtless seen as a dastardly act and a betrayal of Masonic secrecy and honor at the time, it does provide historians a written record of the Masonic degrees as they existed in those formative years. It was also extremely popular at the time, presumably for both a curious public, and for Masons trying to learn to memorize their ritual.

From the MBC announcement:

"When the Grand Lodge of England was formed in 1717, there were only two degrees: Entered Apprentice and Fellow Craft. A “master mason” either held the contract at a job site (think “general contractor”) or was the elected presiding officer of a lodge. The first conferral of the Third or Master Mason Degree in a Masonic lodge occurred in March 1726 in Lodge Dumbarton Kilwinning No. 18. The degree apparently was conferred in May 1725 at a social club of Masons in London, the Philo Musicæ et Architecturæ Societas. There is no hint of what the ceremony may have been—not in the Old Charges, manuscript rituals, or publications. Nothing!

"Then on October 20, 1730, Samuel Prichard published Masonry Dissected with full details of the ritual for what he claimed was the Master Mason Degree. A second edition came out on October 21, and a third edition on October 31, all three published by Wilford in London. A presumably pirated edition dated “MD.CC.XXX” (1730) and printed by Thomas Nichols “without Temple Bar” (London) probably had made its appearance by the end of October 1730. Other presumably pirated versions were printed in Read’s Weekly Journal or British Gazetteer, on October 24, 1730; Northampton Mercury, in two parts on October 28, 1730, and on November 2, 1730; and the second half in The Original Mercury, York Journal: or, Weekly Courant, on November 2, 1730 (the reprint of the first half has not been located).

Technically, this will be Volume 43 of MBC's books published since it originally formed in 1970, but this new edition of the book isn't the first time the the MBC has offered it. The 'old' Masonic Book Club published it in 1977 with wonderful commentary by Harry Carr, Past Master and Secretary of Quatuor Coronati Lodge No. 2076 in London.

"In 1977 the Masonic Book Club reprinted Masonry Dissected with a commentary by Harry Carr, Past Master and Secretary of Quatuor Coronati Lodge No. 2076, London. The MBC will be reprinting this classic edition with Harry Carr’s commentary revised and updated by Ill. Arturo de Hoyos, 33°, G.C., and S. Brent Morris, 33°, G.C. This forty-third MBC volume should have its pre-publication sale in late fall 2021 or early winter 2022. All MBC members will be notified when the book is available for pre-publication purchase."

The first volume of the new MBC was the beautifully-bound The Perfect Ceremonies of Craft Masonry & The Holy Royal Arch and went out to members at the beginning of this year. 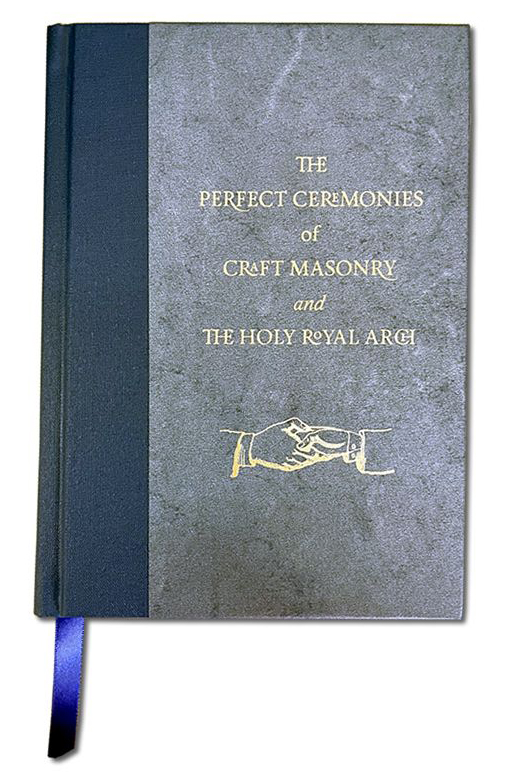 There are no dues for the new Masonic Book Club. Books are announced for pre-publication orders and payments are only collected as books are ready to be manufactured. All transactions are handled exclusively online. Without a rigid calendar driving publications, new books can come out as quickly as nine months or as late as eighteen months, as resources permit. Book prices range in the $25 vicinity for pre-publication orders, or $35 retail if you miss the pre-pub ordering window. Volumes will no longer be numbered as in the old Club, but if the hardback edition sells out the MBC will make a paperback print-on-demand edition available of the books.
To the relief of the MBC's older original members, the new Club actually communicates with members twice a year with an electronic newsletter to keep everyone in the loop about upcoming volumes in the works and their production status. Despite his recent retirement from his longtime job of editing the AASR-SJ's Scottish Rite Journal, S. Brent Morris 33° continues to manage the MBC, and this endeavor has truly been a labor of love for him.

More information can be found at the MBC's website HERE. If you are interested in this or subsequent volumes, you need to sign up on the website. The mission statement of the resurrected Masonic Book Club is to publish classic Masonic works with the goals to increase Masonic knowledge and to become a profit center for the House of the Temple Foundation. If you have any questions or suggestions, please address them to mbc@scottishrite.org.
Posted by Christopher Hodapp at Sunday, August 01, 2021