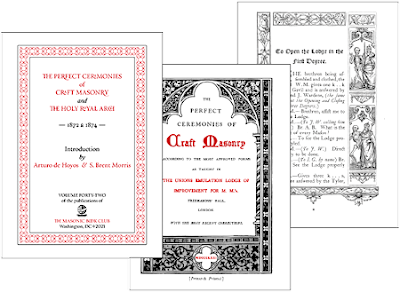 by Christopher Hodapp
Back in September, it was announced that the Masonic Book Club, which went defunct in 2010, was being resurrected under new management by Brent Morris and the Scottish Rite Southern Jurisdiction.
Today it was announced that the first volume of the newly reactivated Masonic Book Club is now ready for pre-publication purchase: The Perfect Ceremonies of Craft Masonry and the Holy Royal Arch. The 392-page hardback book will include marbled covers, a satin ribbon, and rubricated title pages. The Perfect Ceremonies of Craft Masonry and the Holy Royal Arch was published in 1871 and the rituals are considered the lineal ancestors of the official Emulation ritual and lectures used in the United Grand Lodge of England today.
When the two rival grand lodges at work in England (Antients and Moderns) decided to bury the hatchet and merge to become the United Grand Lodge of England in December of 1813, their separate rituals had diverged over the previous century. A Lodge of Reconciliation was named and spent the next two years developing a combined ritual that would be acceptable to both sides. They didn't demand that all lodges knuckle under to some new 'authorized ritual.' Instead, they developed a ritual that contained what they felt were the essential aspects of the Masonic degrees and openings and closings. Lodges were permitted to include their local variations in their ritual work, as long as they contained the essentials laid down by the Lodge of Reconciliation in its final versions approved by the UGLE in 1816.
In 1823, the Emulation Lodge of Improvement was formed by a group of skilled ritualists from both the former Antients and Moderns grand lodges, who were also well versed in the newly adopted ritual being promulgated by the UGLE's official Grand Steward's Lodge system. Their members were some of the most respected ritualists in England, and their goal was to was to instruct the letter-perfect ceremonies through lectures and demonstration.
To this day, the Emulation Lodge of Improvement is the respected authority for approving skilled Preceptors for UGLE's lodges of instruction throughout its jurisdiction.

This new Masonic Book Club edition of The Perfect Ceremonies of Craft Masonry and the Holy Royal Arch picks up numerically from when the original MBC was dissolved several years ago - this book will officially be Volume 42.
Your must order the book from the MBC website HERE.
The MBC pre-publication price is $25 if ordered before January 21st, 2021 – the book will retail for $35 after that date, all plus shipping and handling.
Here are the important details from their announcement today:

If you have any questions, please visit the "FAQs" section on our MBC web page or email us at mbc@scottishrite.org.
We sincerely apologize, **but due to GDPR complications, we can neither accept credit card charges from nor ship to the EU/EEA, at this time**. If this situation applies to you, we suggest that you have a friend outside of the EU/EEA order and receive the book for you.

One other note from the ordering site. As long as there are sufficient pre-orders for the announced book, it is expected to ship at the end of March 2021. If there are insufficient orders, your money will be refunded.
Posted by Christopher Hodapp at Monday, December 21, 2020