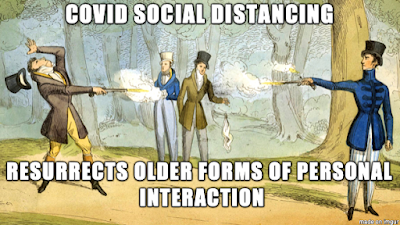 by Christopher Hodapp
Regardless of what your personal opinion may be concerning news about the resurgence of COVID infections and the controversies swirling around masks, lockdowns and vaccines, one thing is certain: if you're a Grand Master, anything you say or do (or choose to NOT do) concerning these topics will result in hellfire and brimstone raining down on your head from your membership.
No matter what you say or do, there will be a great gnashing of teeth. (And fortunately, thanks to federal COVID funding, if you find yourself toothless, teeth will be provided.)
To wit:
Last Wednesday, August 11th, the Grand Master of Arkansas, MW William R. Frizzell, issued an official edict (Edict #3) requiring the Masons in his jurisdiction to return to wearing masks and distancing at lodge meetings, and recommending they get vaccinated against the virus. Irksome? Certainly. But probably prudent if you're the guy responsible for an organization with thousands of members, of which a substantial number are senior citizens who are more at risk than the rest of the population: 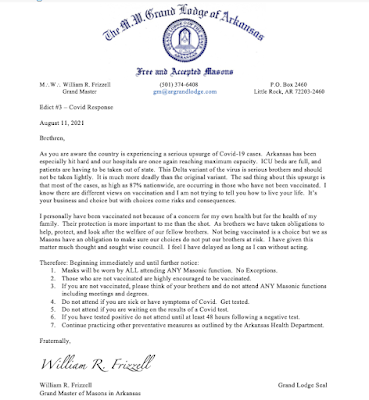 The edict was circulated electronically so it could be immediately disseminated to all members. And it's pretty obvious that the members' responses were immediate, too. One can only imagine the statewide caterwaul over the return to masking that poured into the Grand Master's email inbox, and the nonstop ringing of the office phones in Little Rock.
So, on Thursday morning, Grand Master Frizzell issued Edict #4, which was a clarification of Edict #3, explaining the difference between his requirements for in-person lodge meetings, his requests, and his recommendations: 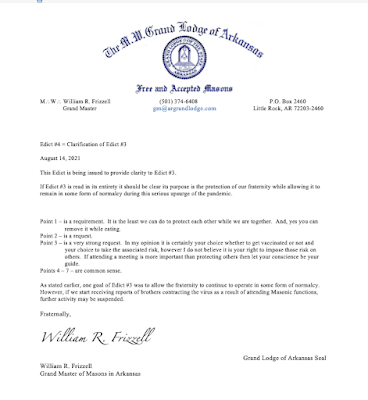 To quote the Bard, "Uneasy lies the head that wears the crown," or the lap that's covered by the purple apron, in this case. It's clear that the protests of the membership became a deluge.
GM Frizzell's Edict #5 was issued that very same afternoon, rescinding #3 and #4, signing off with just two words, "Good luck!" 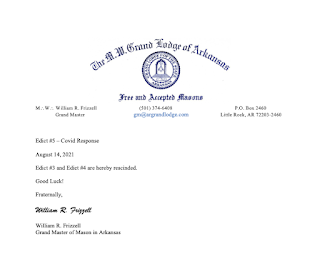 I was reminded of a famous incident at Bastogne, Belgium in December 1944 when the Germans sent an ultimatum to the commander of the U.S. Army's 101st Airborne, Brigadier General Anthony McAuliffe, demanding the immediate surrender of his woefully outnumbered forces. His reply to the German commander was simple and to the point:
"Nuts."
Posted by Christopher Hodapp at Sunday, August 15, 2021