Masonic Symbols On Mothballed Planes Bring Out the Crazies 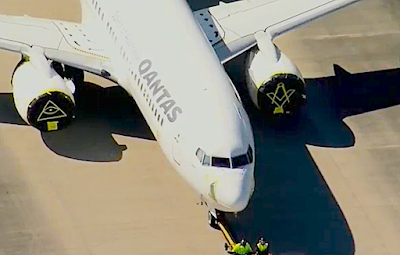 It doesn't take much these days to send the conspiracy lovers into orbit.

A story appeared on the website of Australia's 9News TV station in Sydney on August 19th, reporting on financial losses for Qantas Airlines. Many international flights between the U.S. and Australia have been temporarily halted this year because of the international COVID shutdowns and restrictions. So at the beginning of the report, a half-second long shot showed a mothballed Qantas airliner being towed into storage at the Mojave Air and Space Port as part of a cost-cutting move by the airline.

Some eagle-eyed viewers looked closely at the fleeting opening shot and spotted black engine storage covers on one jet that were adorned with a giant All Seeing Eye and a square and compass. Consequently, social media had a brief blowup over the last couple of days over the Masonic symbols on the plane.

A YouTube conspiracy video entitled 'Qantas busted' has already racked up more than 10,000 views over the weekend. And no, I'm not linking to the thing.

Qantas’ loss of AU$1.9 billion is the greatest drop in revenues in the Australian national airline's 100 year history, and represents a 91% drop in profits. Some 20,000 employees have been laid off, and 6,000 have been pressured to retire (in the chilling English parlance of human obsolescence, "made redundant"). So naturally, lots of people have lots of reasons to look for someone or something to blame.

Nine News contacted the airline and the Mojave storage facility to get to the bottom of this 'controversy' (which means it's been a realllllly slow news week in Australia). The covers are giant plastic tarps stuck to the engine cowlings with high-visibility yellow tape. And according to the airline, it seems that the ground crews occasionally become artistic or bored, and create designs on the covers with tape, as the smiley faces and other markings show in the photo below. 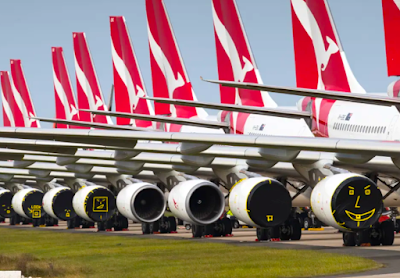 According to the report today, officials said,

"Aircraft engine cover art is a thing," they said.

"As you can see, the yellow tape can sometimes be used quite creatively.

"We've obviously got a few engineers who are fans of The Da Vinci Code, but we've asked them to stick to emojis and smiley faces."

Something in me thinks the brethren in Barstow are toasting each other and cheerfully singing the Stonecutter's anthem tonight.

Whether the Masonic symbols were installed by an arty lodge member, or by a prankster who was just trying to excite the Internet crazies, there's no way of knowing. But "the Freemasons" didn't have anything to do with Qantas’ bad fortunes this year.

But then, that's just what you'd be expecting me to say.
Posted by Christopher Hodapp at Monday, August 24, 2020